Researchers have identified a DNA-derived molecule that binds to and inhibits the function of CYP24 and shows promising antiproliferative activity. 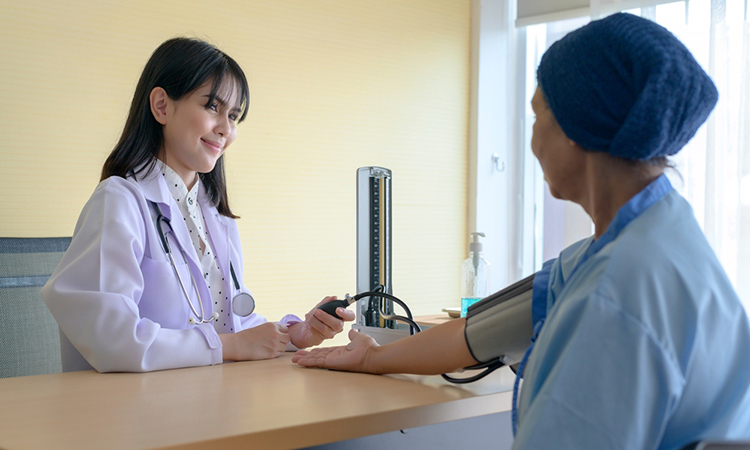 Vitamin D3 is believed to have anticancer activity, as low vitamin D3 levels and the associated overproduction of an enzyme called CYP24 are linked to a poor prognosis for cancer patients.  Molecules that limit or inhibit the action of CYP24 and molecules that mimic the function of vitamin D3 are nowadays highly researched as potential antiproliferative agents for cancer treatment.  But many of the inhibitors and D3 analogues synthesised so far have shown insufficient clinical response, as well as undesired side effects.

In a new study, researchers from Kanazawa University, Japan, have identified a DNA-derived molecule that binds to and inhibits the function of CYP24 and shows promising antiproliferative activity.  The research team also provides detailed insights into the relevant molecular processes at play.

The study, which was recently published in ACS Applied Materials & Interfaces, scientists screened a large number of DNA aptamers — pieces of single-stranded DNA with particular three-dimensional structures that can bind to specific target molecules and have a functional effect upon binding.  They looked for DNA aptamers that bind to CYP24 but not to the similar enzyme CYP271B, which is responsible for the synthesis of vitamin D3.

An integrated approach of HS-AFM and molecular docking to reveal the binding mechanism of Apt-7 to CYP24 (A) The three-dimensional view of the top-ranking docked conformations of CYP24 and Apt-7. The predicted binding sites of Apt-7 are shown by arrow. Aptamer binds to the substrate binding site of CYP24 (binding site-1) and to the ADX binding site of CYP24 (binding site-2). (B) Comparison of the pseudo-HS-AFM graphics of CYP24-Apt-7 using molecular docking generated top-ranked pose of CYP24-Apt-7 complex to the real-time images captured by HS-AFM
[Credit: Kanazawa University].

The team also performed simulations of Apt-7 binding to CYP24.  A molecular docking scenario was obtained, which they checked experimentally by comparing the behaviour of a mixture of vitamin D3 and CYP24 with and without Apt-7.  The simulations and the experiments showed that Apt-7 results in the inhibition of CYP24 activity, and that what happens is that the aptamer likely interferes with the enzyme’s active site.  The researchers also performed high-speed atomic force microscopy on the binding of CYP24 and Apt-7 in real time, confirming the molecular docking scenario obtained from simulations.

Finally, the research team studied the effect of Apt-7 at the cellular level by introducing the molecule to cancer cells.  They observed significant CYP24 inhibition for a cancer cell line known to overexpress the CYP24 enzyme, thus showing antiproliferative activity.  The researchers say that the findings clearly characterised and proposed that a DNA aptamer-based molecule could be a promising lead candidate for anticancer therapy.