Scientists have discovered adenosine could inhibit CD39, a molecule that suppresses the immune system. 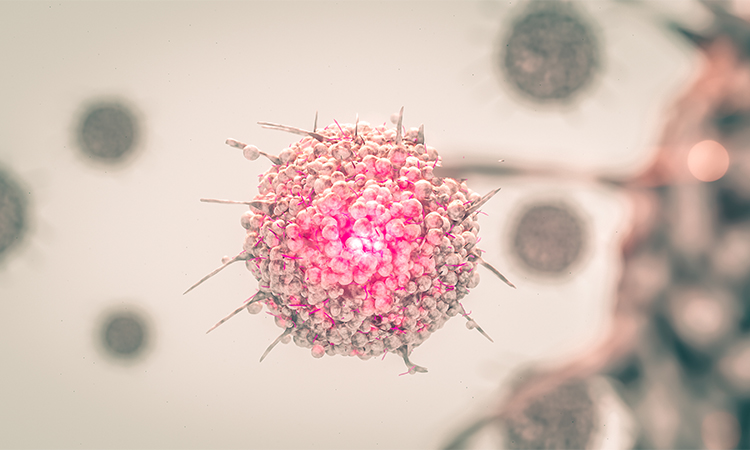 Many cancer cells surround themselves with a dense cloud of adenosine. On the one hand, the molecule suppresses the immune system. At the same time, it stimulates the formation of new blood vessels that supply the tumour with oxygen and nutrients. It also ensures that the malignant cells migrate to other organs and form metastases there. But a drug already approved for other purposes can apparently render this molecule harmless. This is shown in a study by the University of Bonn and the University Medical Center Hamburg-Eppendorf, both Germany. The researchers now want to further optimise the compound to inhibit CD39. In the medium term, the results, which were recently published in the Journal for ImmunoTherapy of Cancer could pave the way for new anti-cancer drugs.

Adenosine is produced from adenosine triphosphate (ATP). Tumour cells secrete large amounts of it. They carry various enzymes on their surface that then convert the ATP to adenosine in several steps. One of these is known as CD39. “It catalyses the first of the conversion steps,” explained Professor Christa Müller. “If CD39 is inhibited, hardly any adenosine is produced.”

Around the globe, pharmaceutical researchers are therefore searching for an active ingredient that slows down CD39. Because without adenosine, tumours would no longer be protected from the immune system. “Instead, ATP would accumulate around the cancer cells, which would actually stimulate the immune response,” said Müller. “So, the body’s own defences would not be suppressed; on the contrary, they would be turned on extra sharp.”

So far, the search has been largely unsuccessful. The research group therefore pursued a new search strategy in the study: “There are other enzymes in the body than CD39 that also process ATP,” explained Laura Schäkel. “These include, for example, the so-called protein kinases. The nice thing is that there are already approved drugs that inhibit protein kinases. We now looked at whether they also work against CD39.”

At the start of the study, there were a total of 50 different agents approved for certain diseases that inhibit protein kinases. The research group examined all of them. With success: “One of the substances, ceritinib, also blocks the conversion of ATP by CD39,” Schäkel reported. “We were able to show this not only in the test tube, but also in cultures with so-called triple-negative breast cancer cells. These are extremely difficult to treat – they usually hardly respond to therapies.”

Nevertheless, the researchers does not think it makes sense to simply administer ceritinib as a CD39 inhibitor in certain cancers. “After all, the active ingredient is primarily directed against a different group of enzymes; it would therefore have undesirable side effects,” Müller said. “We now want to modify it so that it hardly inhibits protein kinases at all and instead slows down CD39 even more.”

Such an optimised active ingredient could also be combined with other therapeutic agents. “Classic cytostatics usually massively weaken the immune system; CD39 blockers, on the other hand, would activate it,” said Müller, “In combination, therefore, the drugs could possibly have a significantly greater effect.”

Before use, moreover, it would first be possible to measure whether the cancer cells of affected patients carry a lot of CD39 on their surface. “Because only then would treatment with CD39 inhibitors make sense,” concluded Müller. “So, you would tailor the administration to the individual patient. This personalisation of immunotherapies for the purpose of enhancing efficiency is becoming increasingly important in medicine.”