The genome of the spotted gar is so much like both zebrafish and humans that it can be used as a bridge species that could open a pathway to important advancements in biomedical research.. 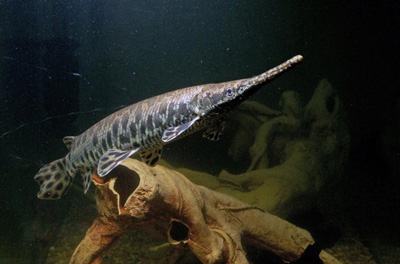 The genome of the spotted gar is so much like both zebrafish and humans that it can be used as a bridge species that could open a pathway to important advancements in biomedical research focused on human diseases.

That is the conclusion of a comprehensive and international research effort, led by the University of Oregon in collaboration with the Broad Institute at MIT and Harvard University.

Researchers sequenced the genome of the gar (Lepisosteus oculatus) – an ancient fish with hard diamond-shaped scales and a long mouth filled with needle-like teeth. As the data were analyzed, researchers realised the spotted gar’s genome is an evolutionary repository of ancient genetic materials, said UO biologist John H. Postlethwait.

“Many genes found in human but not in zebrafish, a favourite for biomedical research, are present in gar, and, likewise, genes present in zebrafish but not in humans are also in gar,” he said. “This relic of a fish retains ancestral characteristics lost by other fishes or humans.”

In addition, numerous evolutionary conserved, non-coding genetic elements are found in gar that are often tied to human diseases, but they are undetectable in zebrafish directly and so couldn’t be studied in the popular medical model, he said.

“The bottom line is that the sequences of non-coding elements have been conserved in humans, gar and zebrafish – even though they don’t code for a protein, they have to be doing something important,” said Postlethwait. “Now, if you first compare human to gar, and then gar to zebrafish, then we can make the connections. The gar is a bridge.”

The discovery, he said, means that biomedical researchers should be able to identify a disease-associated genetic region in humans, locate the corresponding region in the spotted gar and insert it into the appropriate location in the zebrafish or other fish models to potentially understand disease development.

“There are potentially thousands of connections that can be made now,” said Ingo Braasch, a postdoctoral researcher at the UO during the project and now a professor at Michigan State University. “This points to a better way to perform biomedical research for studying human disease. With higher precision, researchers will be able to find the right region in the genome of zebrafish to design experiments and mutation models.”

The genetic importance is traced to some 450 million years ago, when bony vertebrates split into two major groups. Lobe-finned fishes went one way and ray-finned fishes another. Humans and other limbed creatures emerged along the lobe-finned line. The ray-finned line resulted in so-called teleost fishes that are the most common fish recognizable today: zebrafish, stickleback, salmon, tuna, halibut and about every fish found in a home aquarium.

Gars split off the ray-finned evolutionary line before a genome duplication gave rise to the teleost fishes. The researchers concluded that the spotted gar, by missing that duplication, maintained a conserved genetic makeup, including many entire chromosomes similar to those in the ancestor of bony vertebrates.

“Gar is evolving slowly, which means that it has kept more ancestral elements in its genome than other lineages like for example zebrafish,” Braasch said. “Comparisons of human to gar are less confusing because gar does not have all these extra gene copies that zebrafish has from the genome duplication in teleosts.”

The researchers report that gars are well-suited as genomic and laboratory models. Other non-teleost ray-finned fish groups – bichirs, sturgeons, paddlefish, and bowfin – are problematic due to genetic alterations that have occurred during the evolution of their individual lineages or problems with growing them in the lab. In comparison, it is relatively easy to rear gars in a lab and get embryos for developmental studies.