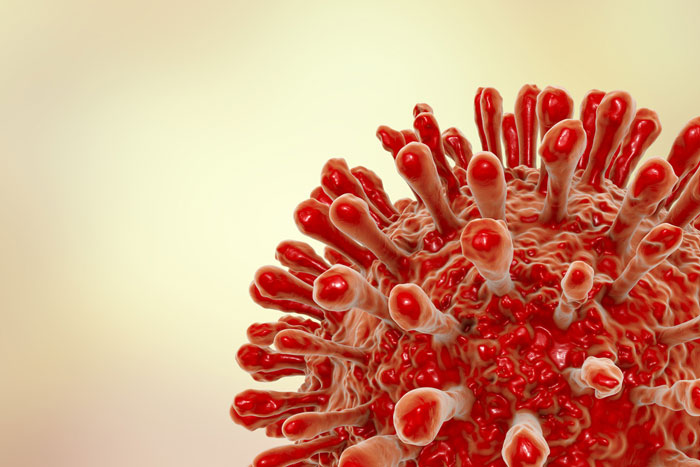 Researchers have for the first time shown that a novel compound effectively suppresses production of the HIV virus in chronically infected cells, and prevents viral rebound, even when those infected cells are subjected to vigorous stimulation.

“No other anti-retroviral used in the clinic today is able to completely suppress viral production in infected cells in vivo,” said Associate Professor Susana Valente, from The Scripps Research Institute (TSRI). “When combining this drug with the standard cocktail of antiretrovirals used to suppress infection in humanised mouse models of HIV-1 infection, our study found a drastic reduction in virus RNA present–it is really the proof-of-concept for a ‘functional cure.'”

Prof Valente, a pioneer in this new approach, calls it “Block-and-Lock”–the approach blocks reactivation of the virus in cells, even during treatment interruptions, and locks HIV into a durable state of latency.

Prof Valente and her colleagues use a derivative of a natural compound called didehydro-Cortistatin A (dCA), which blocks replication in HIV-infected cells by inhibiting the viral transcriptional activator, called Tat, halting viral production, reactivation and replenishment of the latent viral reservoir.

“Combining dCA with anti-retroviral therapy accelerates HIV-1 suppression and prevents viral rebound after treatment interruption, even during strong cellular activation,” said Prof Valente. “It’s important to note that our study uses the maximum tolerable dose of the drug–with virtually no side effects.”

The scientists studied the combination therapy in a mouse model of HIV latency and persistence. Once the combined treatment regimen was halted, viral rebound was delayed up to 19 days, compared with just seven days in mouse models receiving only anti-retroviral treatment.

The result was that the HIV promoter becomes repressed

“This demonstrates the potential of ‘block-and-lock’ strategies,” said TSRI Research Associate Cari F. Kessing, co-first author of the study. “This study shows that a ‘functional cure’ approach can succeed in reducing residual virus in the blood during anti-retroviral treatment and limiting viral rebound during treatment interruption.”

“In half of the dCA treated mice, the virus was undetectable for 16 days after all treatment was halted,” said  Christopher Nixon, University of North Carolina.

“We blocked Tat, and the cell’s machinery did the rest,” said TSRI Research Associate Chuan Li, a co-author of the study. “The result was that the HIV promoter becomes repressed.”

Prof Valente pointed out that the animal models were exposed to just a single month of treatment. “That’s a relatively short period of time,” she said. “We think longer treatments will result in longer, or even permanent, rebound delays. The question is how long? We’re studying that now.”

Because any viral rebound of HIV comes with a host of adverse effects, Prof Valente noted, blocking that rebound would automatically reduce those effects.

“This is the only class of drugs that stops infected cells from making viruses outright,” said Prof Valente. “All current antivirals work later in the viral lifecycle, so only a HIV transcriptional inhibitor like dCA can stop the side effects of low-level virus production.”

The study has been published in the journal Cell Reports.