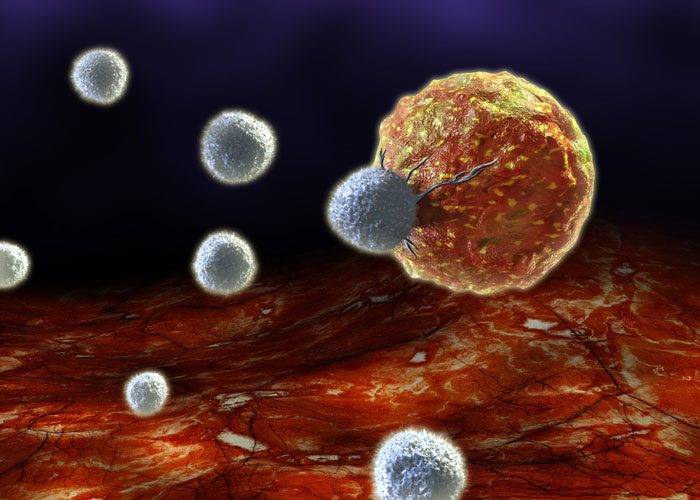 Immunologists and oncologists are harnessing the body’s immune system to fight cancers and other diseases with adoptive cell transfer techniques.

In a normal immune response, a type of white blood cell known as T cells are instructed by another kind of immune cell called an antigen-presenting cell (APC) to expand their numbers and stay alive. Adoptive cell transfer procedures are mimicking exactly this process in a culture dish by taking T cells from patients, multiplying them, sometimes genetically modifying them, and then returning them to patients so that they can, for example, locate and kill cancer cells. However, these procedures often take weeks to produce batches of therapeutic T cells that are large and reactive enough to be able to eliminate their target cells.

With an APC-mimetic biomaterial scaffold, the researchers achieved greater expansion of primary mouse and human T cells than with existing methods; and they demonstrated the approach’s potential in a mouse lymphoma model treated with chimeric antigen receptor-expressing T cells (CAR-T cells) that are engineered to home in on and destroy lymphoma cells.

“Our approach closely mimics how APCs present their stimulating cues to primary T cells on their outer membrane and how they release soluble factors that enhance the survival of the T cells. As a result, we achieve much faster and greater expansion. By varying the compositions of lipids, cues, and diffusible factors in the scaffolds, we engineered a very versatile and flexible platform that can be used to amplify specific T cell populations from blood samples, and that could be deployed in existing therapies such as CAR-T cell therapies,” said David Mooney at Harvard’s Wyss Institute for Biologically Inspired Engineering.

To engineer an APC-mimetic scaffold, the team first loaded tiny mesoporous silica rods (MSRs) with Interleukin 2 (IL-2) ¬– an APC-produced factor that prolongs the survival of associated T cells. The MSRs were then coated with lipids that formed a thin supported lipid bilayer (SLB), which resembles the outer membrane of APCs and that the researchers then functionalised with a pair of T cell-stimulating antibodies that remain mobile in the lipid layer and can bind to receptor/co-receptor molecules on the surface of T cells. In culture medium, 3D scaffolds spontaneously formed through the settling and random stacking of the rods, forming pores big enough to allow the entry, movement, and accumulation of T cells, thereby signalling them to multiply.

In a series of side-by-side comparisons, Dr Mooney’s team demonstrated that APC-mimetic scaffolds performed better than methods involving commercially available expansion beads (Dynabeads), which are currently used in clinical adoptive cell transfer approaches. “In a single dose, APC-mimetic scaffolds led to two- to ten-fold greater expansion of primary mouse and human T cells than Dynabeads. As another advantage, APC-mimetic scaffolds enabled us to tune the ratios of subpopulations of T cells with different roles in the desired immune responses, which in the future might increase their functionality,” said David Zhang, the study’s second author.

Building on these findings, the researchers demonstrated the utility of their T cell expansion platform in a therapeutic model. “Prompted by recent breakthroughs in CAR-T cell therapies, we showed that a specific CAR-T cell product expanded with an APC-mimetic scaffold could facilitate treatment of a mouse model of a human lymphoma cancer,” said first author Dr Alexander Cheung. An APC-mimetic scaffold that was engineered to activate a specific type of CAR-T cell was able to generate higher numbers of the modified T cells over longer periods of culture than analogously designed expansion beads, and the resulting cells were similarly effective in killing the lymphoma cells in the mice.

After successfully using the material to expand all T cells present in a sample, the team demonstrated that APC-mimetic scaffolds could also be used to expand antigen-specific T cell clones from a more complex mixture of cells. Such T cell clones are constantly developed by the immune system to recognise small specific peptides contained in foreign proteins. To this aim, the researchers incorporated molecules into the scaffolds that are known as the major histocompatibility complex (MHC) and that presented small peptides derived from viral proteins to T cells.

“Based also on studies in which we showed that APC-mimetic scaffolds also have superior potential to specifically enrich and expand rare T cell subpopulations from blood, we strongly believe that we created an effective platform technology that could facilitate more effective precision immunotherapies,” said Dr Cheung.

“The bioinspired T cell-activating scaffolds developed by the Wyss Institute’s Immunomaterials Platform could accelerate the success of many immunotherapeutic approaches in the clinic, with life-saving impact on a broad range of patients, in addition to advancing personalised medicine,” said Wyss Institute Founding Director Dr Donald Ingber, who is also the Judah Folkman Professor of Vascular Biology at HMS and the Vascular Biology Program at Boston Children’s Hospital, as well as Professor of Bioengineering at SEAS.