Researchers have made an important step forward in the design of drugs that fight the hepatitis B virus, which can cause liver failure and liver cancer… 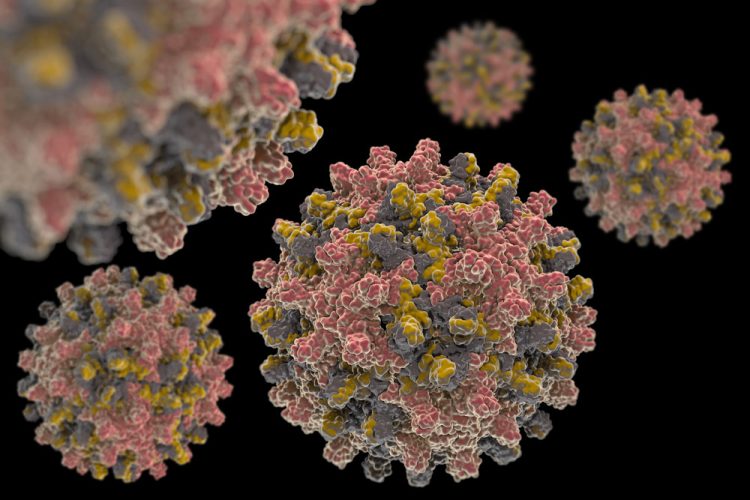 Researchers have made an important step forward in the design of drugs that fight the hepatitis B virus, which can cause liver failure and liver cancer.

The study explains how the structure of the hepatitis B virus changes when bound to an experimental drug. Members of this new class of antiviral drug are now in clinical trials. 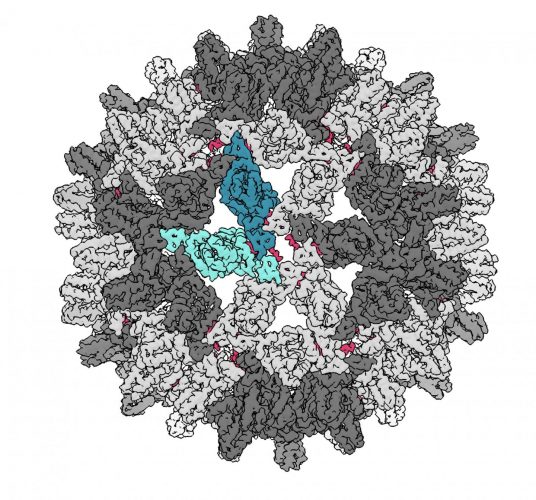 This image shows the shell, or capsid, that encapsulates the DNA of the hepatitis B virus, which is composed of 240 copies of the same protein. The green areas depict the structurally unique regions, which are found in a repeated arrangement across the surface of the shell. The small red areas reveal the sites where the molecule HAP binds to the virus. (Christopher Schlicksup, Indiana University)

“Our discovery suggests that this same drug could attack hepatitis B virus on multiple fronts — both preventing replication and killing new copies of the virus,” said senior author Adam Zlotnick, a Professor in the IU Bloomington College of Arts and Sciences’ Department of Molecular and Cellular Biochemistry. “If we’re smart, we can take advantage of the multiple ways this drug can work at the same time.”

The research was led by Christopher Schlicksup, a graduate student in the department.

A virus reproduces by hijacking a host’s cellular machinery to produce more of the virus. The majority of viruses protect their genetic material — DNA or RNA — inside a protein shell called a “capsid.”

For the past 20 years, Dr Zlotnick’s lab has conducted research to stop viral infections by studying the physics of viruses, focusing on how capsids are formed.

“The reaction is a bit like throwing a deck of cards in the air to build the Taj Mahal — a highly complex structure seemingly emerging from chaos,” Dr Zlotnick said. His work helped discover a class of molecules called core protein allosteric modulators, or CpAMs, that disrupt capsid protein assembly.

CpAM molecules attack viruses by causing their shells to assemble incorrectly, interrupting the life cycle of the virus. Previously, CpAMs were seen as only able to disrupt a virus during formation of the capsid, after which its DNA was protected inside a hard casing.

This new study finds the molecule can break apart this shell even after it has already assembled.

To make their discovery, IU scientists bound the CpAM to a chemical called TAMRA — a crimson-coloured dye used in some red lipstick — to make it fluorescent and easier to detect in experiments. Using cryo-electron microscopy, they found the small CpAM molecule could make the large, soccer ball-shaped virus capsid bend and distort.

“The big implication is viral capsids aren’t as impenetrable as previously thought,” Dr Zlotnick said. “The other implication, which may be even more important, is that if this type of interference works against hepatitis B virus, it might also work against other viruses.

“About half of known virus families have soccer ball-like capsids; examples include polio and herpes,” he added. “This study may lead to better treatments against them since the mechanisms behind capsid disruption could lead to drugs against any of them.”

Next, Dr Zlotnick hopes to conduct similar studies on the CpAMs under clinical trial.

The study has been published in the journal eLife.