A study has pinpointed a molecule that links autophagy and apoptosis, namely a transcription factor called FOXO3a. 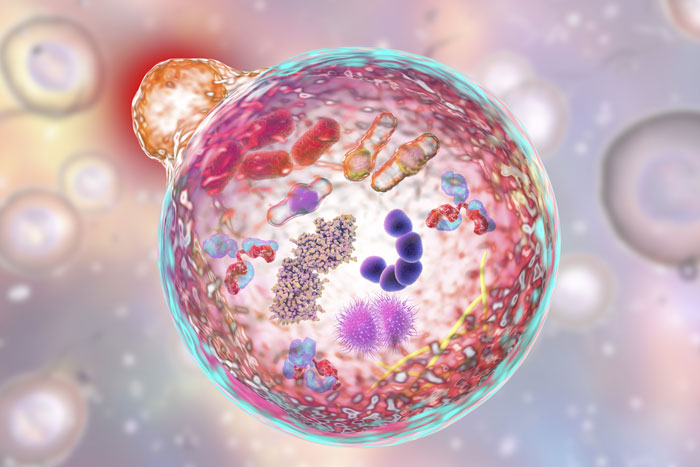 Autophagy (from the Greek term for “self-eating”) helps cells survive stress – very basically, autophagy acts as a kind of cellular recycling system in which unwanted or old parts of the cell are degraded and reused to promote cell health. Unfortunately, cancer cells can hijack autophagy to avoid the stress of anti-cancer drugs that are designed to kill them. This makes autophagy an attractive target for anti-cancer therapies; blocking autophagy may make cancer cells unable to overcome the stress of treatments, leading to their death. In fact, dozens of clinical trials are testing the ability of autophagy-inhibitors along with chemotherapy drugs, radiation or targeted treatments to push cancer cells over the edge into a specific kind of cell death known as apoptosis.

However, while researchers have known of the relationship between autophagy and apoptosis, what creates this link hasn’t been clear – in other words, we have known that turning off autophagy can help drugs push cancer cells into apoptosis, but we haven’t known how.

“The problem is this: many anti-cancer treatments push cancer cells to the brink of death. But the cells use autophagy to go into a kind of suspended animation, pausing but not dying. We don’t want cancer cells to pause; we want them to die. We show that FOXO3a may make the difference between these two outcomes,” says Andrew Thorburn, DPhil, CU Cancer Center investigator, professor and chairman of the CU School of Medicine Department of Pharmacology.

The Thorburn lab has spent decades picking apart the inner workings of the complex and sometimes seemingly contradictory process of autophagy. For example, the lab has shown that turning off autophagy sensitizes some cancers but not others to chemotherapy/radiotherapy and some cancers even thrive in the absence of autophagy (which in turn upregulates researcher face-palming).

Taken alone, these contradictions make little sense. There must me more going on. And it turns out that “what’s going on” is FOXO3a.

Imagine this: the colder your body gets, the more you shiver to warm up. Thus, shivering helps to maintain equilibrium – despite variations in air temperature, your body stays at 98.6 degrees. Autophagy has a similar mechanism of equilibrium: FOXO3a regulates and is regulated by autophagy. This means that when autophagy goes up, FOXO3a goes down, which in turn acts to dial back autophagy. And when autophagy goes down, FOXO3a goes up, which reinvigorates autophagy. By this mechanism, autophagy stays relatively constant…even, sometimes, in the face of oncologists’ attempts to dampen it with drugs.

However, FOXO3a not only maintains autophagy equilibrium but also controls the gene that makes a protein called PUMA – and PUMA drives the cell death known as apoptosis.

Putting it all together, inhibiting autophagy boosts FOXO3a, which has two important results: first, it increases autophagy in an attempt to keep it in a Goldilocks range; and second, it increases the production of PUMA, which pushes cells toward apoptosis.

Thorburn and colleagues including first author Brent E. Fitzwalter tested autophagy inhibition along with a drug called Nutlin. Previously, the drug has been shown to inhibit the growth of cancer cells, but hasn’t necessarily resulted in cancer cell death – the “pause but not die” outcome described above. Here is an important point: Nutlin and autophagy-inhibition both increase PUMA, but do so in completely independent ways (autophagy inhibition through FOXO3a and Nutlin through another transcription factor called p53).

“What we wanted to see is whether these two things together – Nutlin along with autophagy inhibition – would increase PUMA past the point of growth inhibition and into actual cell death,” Fitzwalter says.

The answer was yes. The combination was much more effective against cancer cells than either strategy alone. This was true in cell studies and also in test tumours grown in mice.

“The punchline was that we turned a drug that could slow down tumor growth but couldn’t kill cancer cells into one that now kills the cells,” Thorburn says.

The results provide a rationale for which types of drugs that could combined with autophagy inhibition in future clinical trials.