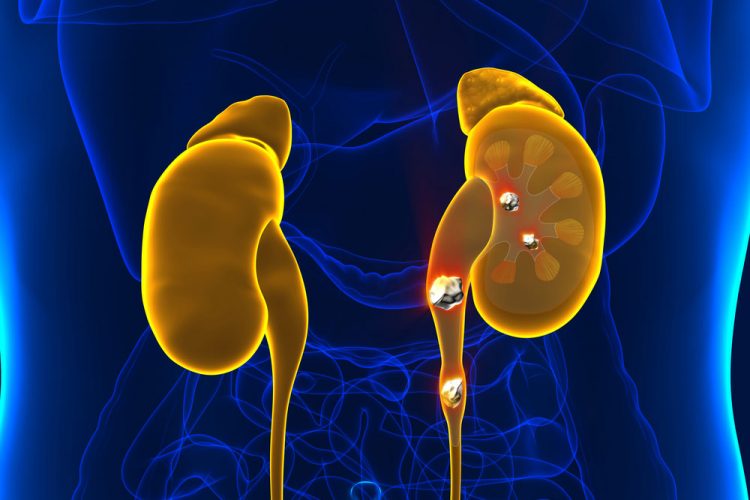 Scientists have found that a drug connected with fat regulation prevents the formation of kidney stones in mice. This early work opens the possibility of developing drugs which may help prevent kidney stones in at-risk individuals.

A group of Japanese scientists have discovered that an experimental drug leads to a significantly reduced number of kidney stones in mice. They gave 20 mice 1mg/kg of the β3- agonist CL316243 for 12 days. Then the mice, plus 20 controls, were then injected with glyoxylate, which causes the formation of kidney stones. At various time points, the mice were then checked to see if they had formed stones: the formation of stones decreased to 17% in the experimental group, compared with the controls.

“This is experimental work for now,” said lead researcher Dr Teruaki Sugino (Nagoya City University Graduate School of Medical Sciences). “But I believe that this may open the way to the development of the new drugs which can stop the development of kidney stones in at-risk people. So far we have only tested this on mice, but in mice, it seems to work”.

“We were able to analyse the biochemical differences between the control and experimental group, and discovered that the β3-agonist reduced the expression of adipocytokine molecules, which are associated with inflammation”.

The researchers believe that free fatty acids cause inflammation and cytotoxic effects in kidneys, which promotes stones. β3-agonists are known to cause white fat cells into beige fat cells, which burn extra calories, which is why these molecules are also being considered for anti-obesity uses. The researchers suspect that beige cells consume free fatty acids, which may be the cause of inflammation in the kidneys leading to kidney stones. This means that β3-agonists have the potential to prevent not only obesity but also kidney stones.

“Renal stones affect many people, and have a high economic impact, so it’s a pity that we still have an only rudimentary understanding on why stones form. Metabolic factors definitely play an important role and this work contributes to unravelling the pathogenesis. We’ve had decades of urine crystallisation studies, which have not really advanced the field. I hope that this work leads to more researchers doing work on the topic.

Currently, potassium-sodium citrate drugs are used to restrict the development of kidney stones, but some people can’t use these drugs because they need to limit their potassium or sodium intake.

The authors note the limitations of the study. It is animal work, so cannot yet be directly applied to humans. The molecule has not been tested for tolerability, efficacy, or cost. It is also an initial ‘proof-of-concept’ study, so needs to be repeated with a larger sample size.

The research was presented at the European Association of Urology Conference in Copenhagen.