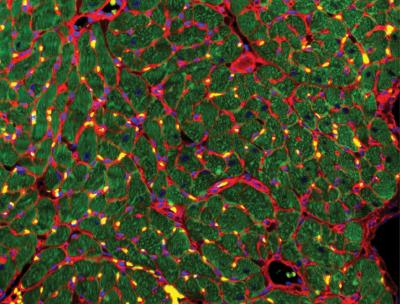 A team of researchers have created a new approach to help injured hearts regenerate by applying extracellular vesicles secreted by cardiomyocytes rather than implanting the cells. The study shows that the cardiomyocytes derived from human pluripotent stem cells could be a powerful, untapped source of therapeutic microvesicles that could lead to safe and effective treatments of damaged hearts.

Cell-secreted microvesicles are easy to isolate and can be frozen and stored over long periods of time. Such an “off-the-shelf” product has several major advantages over cell therapy–1) it can be used immediately in an acute-care setting, unlike cells that can take months to isolate and grow; 2) it does not cause arrhythmia (which often occurs when cells are transplanted); 3) the regulatory path towards clinical application is much simpler than for a cell-based therapy.

It is well known from numerous clinical studies that most of the implanted stem cells are washed away within hours of the treatment, but there still are beneficial effects. This has led to the informal “hit-and-run” hypothesis, meaning that the cells deliver their cargo of regulatory molecules before leaving the site of injury. “Consistent with this hypothesis, we postulated that the benefits of cell therapy of the heart could be coming from the secreted bioactive molecules (such as micro RNAs), rather than the cells themselves,” says Biomedical Engineering Professor Gordana Vunjak-Novakovic, “So we explored whether the benefits of cell therapy of the injured heart could be achieved without using the cells. This way, we would largely simplify the translation into the clinic, and avoid the burden of arrhythmia associated with implantation of contractile cells.”

“We reasoned that the cardiomyocytes would be the best source of molecules driving the recovery of injured heart, as it is well known that these cells can build muscle when used in tissue-engineering models,” says researcher Bohao Liu, the paper’s co-lead author at the Columbia Engineering’s department of biomedical engineering. “I’m very excited about our promising results, and I believe that the cell-free therapy represents a step in the right direction for developing safe and effective treatments of the infarcted heart.”

The interdisciplinary team, which included bioengineers, clinicians, and systems biology scientists, derived cardiomyocytes from adult human stem cells and cultured these cells to allow them to secrete extracellular vesicles. The vesicles secreted by undifferentiated stem cells were used for comparison. The researchers then used next-generation sequencing to read their messages and instructions. They found that the extracellular vesicles from cardiomyocytes–but not from stem cells–contained cardiogenic and vasculogenic microRNAs that are very powerful regulatory molecules.

Building on the expertise of Prof Vunjak-Novakovic’s lab in biomaterials and hydrogels, the team encapsulated the vesicles in a collagen-based patch that slowly released them over the course of four weeks when implanted onto the injured heart in rat models of myocardial infarction. The researchers monitored the heart to measure blood-pumping function and look for any signs of arrhythmia.

“We were really excited to find that not only did the hearts treated with cardiomyocyte extracellular vesicles experienced much fewer arrhythmias, but they also recovered cardiac function most effectively and most completely,” says Prof Vunjak-Novakovic. “In fact, by four weeks after treatment, the hearts treated with extracellular vesicles had a similar cardiac function as those that were never injured.”

The team plans next to determine how much the properties of extracellular vesicles change with the maturation of cardiomyocytes derived from pluripotent stem cells, and what would be the optimal developmental stage, or level of maturity, of cardiomyocytes to maximize therapeutic outcomes. They are also exploring the specific mechanisms behind the therapeutic effects observed in this study.

“Once we better understand how exactly the extracellular vesicles do what they do,” Prof Vunjak-Novakovic adds, “we should be able to extend their use to a range of cardiovascular diseases, and significantly advance the field of cell-free heart therapy.”

The study has been published online in Nature Biomedical Engineering.