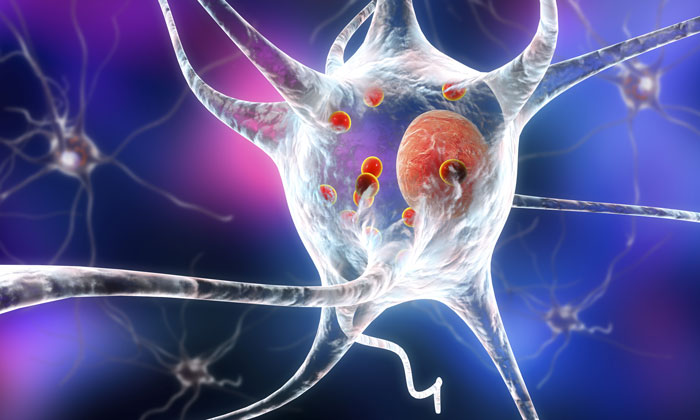 The research team’s results (from the Perelman School of Medicine at the University of Pennsylvania) are published in Nature.

“These unexpected findings of the effect of cell type on the generation of different α-syn strains addresses one of the most important mysteries in neurodegenerative disease research,” said first author Chao Peng, PhD, a research associate in the Center for Neurodegenerative Disease Research (CNDR).

The relationship between cell type and variety of disease protein has not been described for any other neurodegenerative brain disorder. For now, the hope is that one strain associated with multiple system atrophy (MSA) might point the way to new therapies.

What had been known before this study is that in cases of Parkinson’s disease without and with dementia, dementia with Lewy bodies, and in about 50% of Alzheimer’s disease patients, α-syn aggregates in neurons as Lewy bodies (LBs) and Lewy neurites in axons and dendrites. However, in MSA, a rare neurodegenerative disease with widespread effects on the brain and body, α-syn behaves differently. It mainly accumulates as glial cytoplasmic inclusions (GCIs) outside the nucleus in the cytoplasm of oligodendrocytes, a brain structural cell important for myelin production (the insulation material of nerve cell fibers).

The Penn team found that pathological α-syn in GCIs versus LBs are distinct in shape and biology. The α-syn in GCIs forms more compact structures and is about 1,000-fold more potent in seeding and spreading α-syn aggregation in animal models, which is consistent with the highly aggressive nature of MSA.

“Years ago we found that α-syn fibrils act as ‘seeds’ that induce normal α-syn protein to aggregate into clumps,” said senior author Virginia M.-Y. Lee, PhD, CNDR director and a professor of Pathology and Laboratory Medicine. “We showed that α-syn fibrils were taken up by healthy neurons, which leads to the formation of Lewy bodies and neurites that impair neuron function, leading to nerve cell death.”

Surprisingly, say the researchers, pathological α-syn in GCIs and LBs did not show a preference for a specific cell type in starting pathology when human brain-derived α-syn of each type was used to induce aggregates in cell culture and mouse models.

“This raises the question of why α-syn pathology in Parkinson’s disease versus multiple system atrophy shows different potencies, properties, and distributions in neurons versus glial cells,” Lee said.

The researchers also found that oligodendrocytes, but not neurons, transform misfolded α-syn into the cytoplasmic strain, which explains the distribution of the two forms by cell type. On the other hand, cytoplasmic α-syn maintains its active seeding function when propagated from neuron to neuron. From this, the researchers concluded that α-syn strains are determined by both misfolded α-syn seeds and cell type.

The team’s next steps will be to uncover the underlying molecular mechanism for the differences between the strains. The molecules in oligodendrocytes responsible for the highly potent cytoplasmic strain might suggest viable drug targets for MSA and explain why therapies used to treat other synucleinopathies may not work for MSA patients.

Center for Neurodegenerative Disease Research (CNDR), Perelman School of Medicine at the University of Pennsylvania