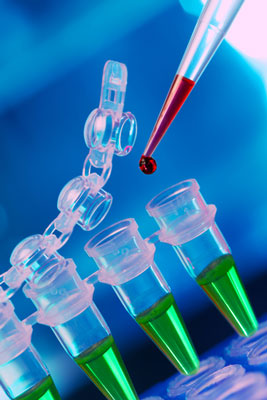 A group of academic organisations and funders has entered an agreement with biopharmaceutical company Basilea Pharmaceutica Ltd. to progress a new family of cancer drugs designed to block several key cancer-causing proteins at once.

The consortium, including The Institute of Cancer Research (ICR), the Wellcome Trust, Cancer Research Technology (CRT) and The University of Manchester, has granted Basilea exclusive worldwide rights to develop, manufacture and commercialise novel panRAF inhibitors.

The new drug class originated from research at the ICR, funded by Wellcome Trust and Cancer Research UK.

The drugs have the potential to be used where a patient’s tumour has developed resistance to existing drugs targeting the BRAF protein, which is mutated in a range of cancers, including 50% of melanomas and 10% of bowel cancers. The drugs target both BRAF and the growth pathways that the cells come to rely on when they become resistant. It is hoped that the new drugs could be effective in patients who have developed drug resistance and exhausted all other available treatments.

Dr Richard Seabrook, Head of Business Development at the Wellcome Trust, said: “Resistance to existing cancer drugs can be a tragedy for patients. By targeting multiple cancer-causing proteins, these new panRAF inhibitors could help overcome this problem and have the potential to be of great value in the clinic.”

Of the collaboration, Professor Caroline Springer, Professor of Biological Chemistry at the ICR, said: “The agreement provides the foundation for the clinical development of this exciting new drug class. It is an important milestone in efforts to tackle resistance to existing cancer therapies and provide new options for cancer patients.”

Dr. Laurenz Kellenberger, Basilea’s Chief Scientific Officer, said: “We are excited about complementing our growing and maturing oncology pipeline with this novel program, including a lead compound expected to enter clinical testing in 2015.”

Professor Richard Marais, Director of the Cancer Research UK Manchester Institute at The University of Manchester added: “This agreement represents the culmination of over 10 years of academic research and we are pleased to see our basic research studies being translated into patient benefit.”

Dr Keith Blundy, Chief Executive of Cancer Research Technology, said: “It’s always very rewarding to see a discovery involving Cancer Research UK funding making that vital first step into the clinic. This agreement is a great example of leading academic and clinical institutions working together with industry and the NHS to translate exciting new discoveries into new treatments that could benefit patients.”

For more information about the Institute of Cancer Research, please visit www.icr.ac.uk.