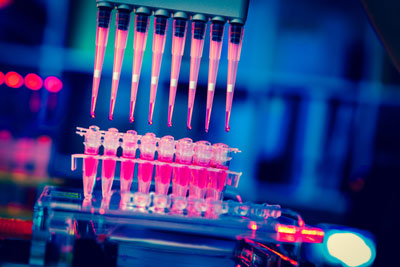 A team at Cold Spring Harbor Laboratory (CSHL) has published results of experiments that lay bare a previously unknown pathway activated in a highly lethal form of breast cancer.

HER2-positive breast cancer has been traced to an excess of signalling through receptors, or docking ports, called HER2 found on the surface of certain mammary epithelial cells. When an activating protein docks at the receptor, a cascade of signals is sent inside breast cells. Ultimately, these signals change the expression of genes in the cell nucleus, causing the cell to grow abnormally. Herceptin, when it works, blocks  the ability of HER2 receptors to send these aberrant, growth-inducing signals inside the cell.

But often Herceptin does not work at all, and even when effective, it stops working after a while. With this in mind, Tonks and a team that included Mathangi Ramesh, a Ph.D. student in his lab and first author of the new paper, set out to find weaknesses “downstream” of the HER2 receptor, inside breast cancer cells. In particular, they looked at the possible involvement in the HER2 pathway of a class of enzymes called protein tyrosine phosphatases, or PTPs. Transmission of signals in a cell is controlled by the coordinated activity of two families of enzymes: protein tyrosine kinases, which add phosphate groups to proteins; and protein tyrosine phosphatases, which remove them. Dr. Tonks purified the first-discovered member of the PTP family of enzymes, called PTP1B, in 1988. It has been shown that PTP1B has a role in regulating proliferation in HER2-positive breast cancer cells.

Without PTPD2, abnormal growth of the type seen in HER2-positive cancers does not occur

In the new work, the team looked at 37 members of the PTP family to see if any of them also helped to regulate some part of the HER2 pathway. Using a three-dimensional model of mammary cell development created by Dr. Senthil Muthuswamy, formerly of CSHL and now at the University of Toronto, the team tested to see if abnormal growth initiated by HER2 signalling would be either enhanced or reduced if any of the 37 PTPs was experimentally “knocked down.” They went through the list methodically, one at a time. This led them to focus on one in particular, called PTPD2.

In this screen, Mathangi Ramesh found that when PTPD2 was absent in mammary cells grown in 3-D culture, the cells failed to grow abnormally, even when the HER2 signalling pathway was activated. PTPD2, therefore, is what scientists call a “positive regulator” of the pathway. Without it, abnormal growth of the type seen in HER2-positive cancers does not occur. Conversely, a future drug that prevents PTPD2 from acting in cancer cells could generate therapeutic results – by preventing or reducing HER2 signalling.

In other experiments designed to determine how PTPD2 operates in HER2-activated breast cancer cells, the team found an “interaction partner,” a lipid called phosphatidic acid, or PA. PTPD2 binds to PA, the team discovered, and becomes more active as a consequence. Another series of experiments demonstrated that when the enzyme that generates PA in the cell, called PLD2, is targeted with an existing small-molecule drug, abnormal growth does not occur in mammary cells in which the HER2 pathway is activated. Thus PLD2 is also a potential drug target.

Perhaps most exciting, the CSHL team was able to show a specific series of relationships with direct implications for possible future combination drug development.

“In this work, Mathangi Ramesh has found a new pathway – a signalling pathway downstream of HER2 that we didn’t know about before,” Tonks says. “Two components of the pathway, the phosphatase PTPD2 and the lipid PA, are together required for HER2 signalling to function in mammary epithelial cells.” Specifically, they are required in processes in which mammary cells lose their normal polarity, or spatial orientation; and in which the cells lose the ability to commit pre-programmed suicide, or apoptosis, upon detection of gross abnormalities. Both of these flaws occur in HER2-positive breast cancer cells.

Both PTPD2 and PLD2 might therefore be the targets of future drugs. So too might the phosphatase PTP1B, which in prior work was shown to be required for a third aspect of HER2-related carcinogenesis – proliferation – that neither PTPD2 or PLD2 specifically affects, as shown in the current phase of the research.

“If you can use combination approaches, hitting multiple targets within the cell to reduce the activity of each, and you see a synergistic effect between them, you may be able to overcome some of their harmful effects in HER2-positive cancer, and perhaps also resistance,” says Tonks. “That is our goal.”