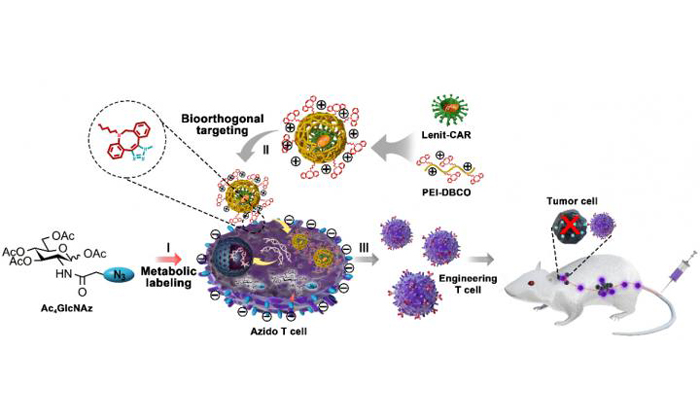 Led by Professor Cai Lintao at the Shenzhen Institutes of Advanced Technology (SIAT) of the Chinese Academy of Sciences, and other collaborators, a research team has developed a “safe, efficient and universal” strategy based on bioorthogonal chemistry and glycol-metabolic labeling for viral-mediated engineered T cell manufacturing

However, the genetic manipulation of primary T cells remains inefficient, especially during the clinical manufacturing process, and there’s an urgent need to develop a reliable method for the preparation of engineered T cells.

“We found that this artificial chemical receptor effectively facilitated viral binding to T cells and elevated the transduction efficiency of the lentivirus from 20 to 80 percent without any effect on T cell proliferation and activity,” Professor Lintao explained. “This artificial chemical modification was also appropriate for introducing other heterologous genes into T cells, including GPF, CAR and TCR, indicating a great potency for universal T cell engineering.”

The technique has also been demonstrated to be safe for human primary T cells without interference from cell expansion or antitumor functions.

When put into the CAR-T preparation, the PEI-DBCO/azide-glucose system increased the yield of CAR T cells and boosted their antitumor effect in both the in vitro and the B lymphoma xenograft mouse model with a low dose of CAR-T cells, thus reducing clinical adverse effects.

The research team’s findings were published in Advanced Functional Materials.