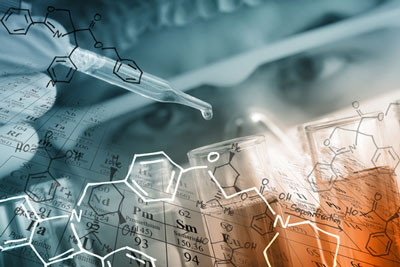 Chemists at The Scripps Research Institute (TSRI) have discovered a broad and strikingly inexpensive method for synthesising “amines,” a class of organic compounds prominent in drugs and other modern products.

The new reaction is particularly useful for synthesising complex amines that would be highly valuable in pharmaceuticals, but are impractical—or impossible—to make with standard methods. Yet the reaction requires little more than the mixing of two abundant compounds, a nitroarene and an olefin, with an iron catalyst.

“This is interesting science because a transformation like this has never been seen before,” said Phil S. Baran, the Darlene Shiley Chair in Chemistry at TSRI who led the new study. “Part of what’s unique about this scientific advance is that it’s also being immediately applied by industry—it’s just pretty darn useful. It’s as if we’re taking dirt, and then adding a bit of rust, and putting it all in a blender and ending up with gold—except that the amines we can make with this new method are often worth much more than their weight in gold.”

Some amines are hard to make using standard methods

Amines are chemical cousins of the relatively simple molecule ammonia (NH3), although they are often much more complex. Some amines with particularly desirable properties—such as a resistance to breakdown by enzymes in the body—are hard to make using standard methods.

As Baran and his team explored the scope of the new reaction by cataloguing how pairings of different nitroarenes and olefins yield different amines, they found the reaction worked smoothly under unusually mild conditions to generate a great variety of complex amine-containing compounds.

“Some of the compounds we made contain sensitive functional groups that can’t survive conventional amine synthesis reactions,” said Jinghan Gui, a research associate in the Baran laboratory.

In addition to the unusually high tolerance for functional groups, the new amine synthesis utilises humble main ingredients. “Nitroarenes and olefins are cheap feedstock chemicals that everybody already has on their lab shelf,” Baran said. “Yet when they are merged together in this unique way, they turn out to make compounds that would be extraordinarily difficult to make in any other way.”

The team used the reaction to synthesise more than 100 different amines, including valuable drug compounds, in fewer steps than traditional methods could afford.

Much of this work was conducted by chemists at Bristol-Myers Squibb, which has an ongoing research collaboration with TSRI, and at the New Jersey-based contract research organization Kemxtree.

“This reaction is conceptually novel, yet simple and practical to carry out—just in the past two months we’ve used it for dozens of decagram-scale reactions in our lab,” said Kemxtree chemist Swaminathan R. Natarajan, who is constructing new libraries of unique amine compounds for drug discovery research.

“The inexpensive and mild nature of this reaction, along with its high functional group tolerance, make it potentially useful for our work,” said Bristol-Myers Squibb process chemist Michael A. Schmidt. “This transformation could greatly improve the synthetic efficiency of making complex molecules.”

“While testing this new methodology, we were able to rapidly access targeted intermediate compounds for which other standard methods of preparation had failed,” said Bristol-Myers Squibb discovery chemist Bill Pitts.

“This innovative method developed by the Baran laboratory provides our partners in academia and industry with a highly practical way of accessing typically unexplored chemical space,” said Christopher Thomas, global product manager at chemistry supplier Sigma-Aldrich, which partially funded the research under a collaborationn and commercialization agreement with TSRI.

The Baran lab continues to evaluate the reaction’s utility for different applications.

The findings were reported in the journal Science.