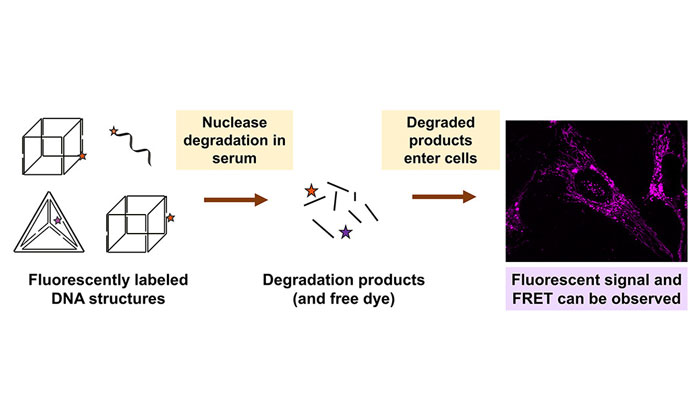 This is according to researchers at McGill University. In a paper published in the American Chemical Society journal ACS Central Science, the McGill scientists demonstrate that many DNA cage nanostructures aren’t taken up by cells to a significant extent.

In a series of experiments, they show, instead, that the DNA nanostructures are degraded by enzymes outside the cell; a fluorescent dye used for tracking purposes separates from the nanostructure; and the dye – or a small fragment containing the dye – is taken up in cells.

The resulting fluorescent signal from within the cell is easily misinterpreted as indicating that the nanostructure, itself, has entered the cell. The group also showed that a commonly used fluorescence experiment (called FRET), involving energy transfer between two dyes on a structure can also give erroneous results.

This finding is significant because DNA strands are considered to be a promising tool for stopping the production of proteins associated with disease – yet delivering the strands into cells is a technical challenge.

“Our paper is a cautionary tale for scientists working in the field of DNA/RNA delivery through selective therapeutics,” says senior author Hanadi Sleiman, Professor of Chemistry at McGill and Canada Research Chair in DNA Nanoscience.

This problem could, however, be turned into an advantage, notes lead author Aurélie Lacroix, a graduate student in Professor Sleiman’s lab: “We could attach molecules on DNA nanostructures that make them enter diseased cells – for example cancer cells – but not normal cells. This would make it possible to selectively deliver drugs into diseased cells.”