A new way to cleanly separate out cancer cells from a blood sample will enable comprehensive genetic profiling of the cancer cells. 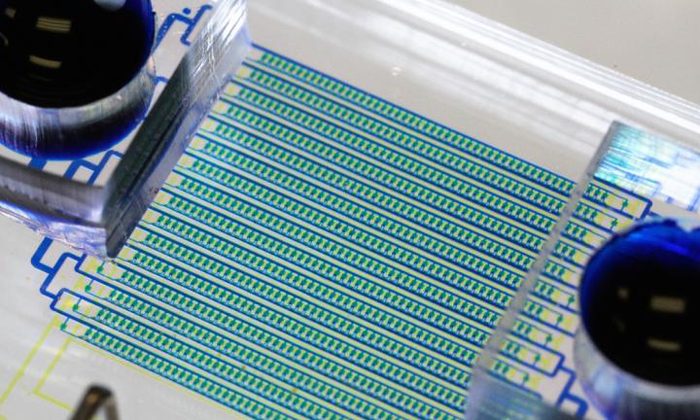 Hydro-Seq is a newly developed system of channels and chambers that traps cancer cells one at a time in a blood sample and enables comprehensive genetic profiling of cancer. Developed by engineers at the University of Michigan, it is a dramatic improvement over current approaches. (Credit: Euisik Yoon)

This could help doctors target tumours and monitor treatments more effectively as it encompasses the variation among cancer cells within a single patient.

“This could be a whole different ball game,” said Max Wicha, the Madeline and Sidney Forbes Professor of Oncology at the University of Michigan and senior physician on the study. “It allows you not only to select targeted therapies, but to monitor the effects of these therapies in patients by doing this blood test.”

“Our chip allows us to capture pure circulating tumour cells and then extract genetic information without any contamination from red and white blood cells,” added Euisik Yoon, U-M professor of electrical engineering and computer science and senior author on the study.

To get a clean and unbiased set of cancer cells from a vial of blood, the team started with a technique that removes blood cells by sorting the blood sample according to cell size. Starting with about one cancer cell in a billion blood cells, this step left only about 95 or so blood cells for every cancer cell. But that’s still far too contaminated for a detailed genetic analysis.

The new method, which the researchers call Hydro-Seq, gets rid of those last blood cells and then analyses each cell.

The key technology is a chip with a system of channels and chambers. It traps cancer cells one at a time by drawing fluid through a drain in each chamber, which gets plugged when a cancer cell arrives. Once the chamber is plugged, cells in the channel pass it by and get sucked into the next chamber.

Then, to ‘wash’ the blood cells off the chip, they run clean fluid backward through the chip and draw it out again, taking nearly all the rest of the contaminating cells along.

With a clean sample of isolated cancer cells, the team did genetic profiles. They went after the cells’ ‘transcriptomes’ which revealed the cells’ active genes.

They captured the transcriptomes with barcoded beads and dropped a barcoded bead into each chamber and then closed the chambers before destroying the cell membranes. This released the RNA so that it attached to the barcoded genetic code on the bead. The team could then analyse the contents of each cell separately.

The study is published open-access in Nature Communications.