Learn how to accelerate your biologic therapeutic development in our free webinar
Listen to experts on how to obtain quality data from organoids
Want to know how to quickly and efficiently, initiate your hit-to-lead program?
Discover how an integrated structural biology approach can provide critical structural insights
Read our latest digital journal for free
Subscribe for free to access all of our exclusive online content
Advertorial 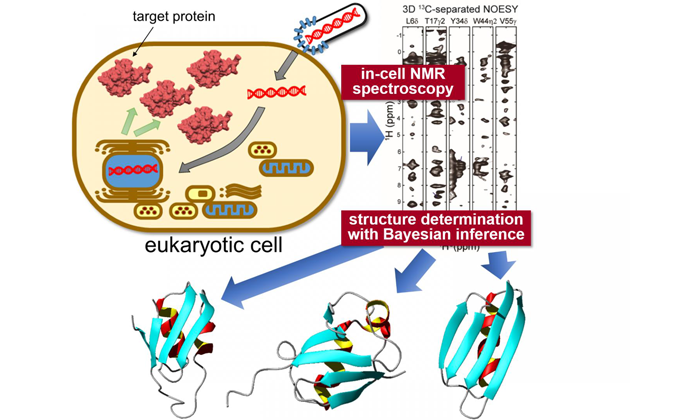 Target proteins are expressed inside sf9 cells, then measured using "in-cell" NMR spectroscopy. Unique statistical analysis with the help of Bayesian inference is applied to calculate the accurate 3D structure of the proteins with unprecedented precision (credit: Tokyo Metropolitan University).

The technique promises insight into the intracellular behaviour of disease-causing proteins and novel drug screening applications, allowing in-situ visualisation of how proteins respond to biochemical stimuli.

A bioreactor system was also equipped inside the NMR apparatus which kept the cells in a healthy state during the measurements.

With this new data, the team were able to elucidate the 3D structure of three model proteins with unprecedentedly high resolution, with a precision of 0.5 Angstroms (0.05 nanometers) for the position of the protein’s main chain atoms. In particular, they identified a significantly different conformation in a localised region of one of the proteins compared to its reference structure in dilute solution.

The conformational difference between proteins ‘in cells’ and ‘in test tubes’ was presumably caused by non-specific interactions with other molecules inside the cells. It is becoming clear that these interactions contribute to the proteins’ biological functions: the ability to locate and quantify structural changes of proteins in an intracellular environment is expected to have a significant impact on biomedical research, making it possible to see how different conditions affect protein conformations in-situ, and quantitatively gauge how treatments impact structural anomalies.

The study has been published online in the journal Angewandte Chemie International Edition.