When the T cells of your immune system are forced to deal over time with cancer or a chronic infection, they can develop “T cell exhaustion”… 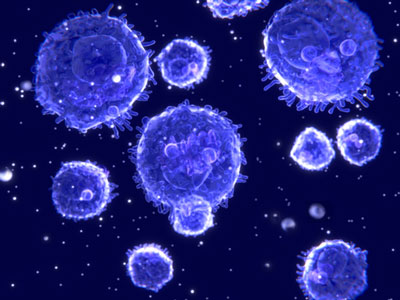 When the T cells of your immune system are forced to deal over time with cancer or a chronic infection such as HIV or hepatitis C, they can develop “T cell exhaustion,” becoming less effective and losing their ability to attack and destroy the invaders of the body.

While the PD-1 protein pathway has long been implicated as a primary player in T cell exhaustion, a major question has been whether PD-1 actually directly causes exhaustion. A new paper from the lab of E. John Wherry, PhD, a professor of Microbiology and Director of the Institute for Immunology, in the Perelman School of Medicine at the University of Pennsylvania, seems to – at least partially – let PD-1 off the hook.

In short-term infections such as a cold or flu, PD-1 helps to regulate an initial strong T cell response, preventing the T cells from over proliferating and attacking the body’s own cells after the infection is cleared. But in patients with cancer or chronic infections, blocking PD-1 has proved a highly successful therapeutic strategy that allows the T cells to fight on.

“Blocking this pathway reverses T cell exhaustion and improves tumour immunity in humans and antiviral and anti-tumour responses in animal models,” Wherry notes.  “But a key question has been whether this PD-1 pathway causes exhaustion. Our work shows that it does not.”

Wherry and his collaborators used PD-1 knockout mice infected with lymphocytic choriomeningitis virus to see whether the genetic deletion of PD-1 would be enough to prevent T cell exhaustion. They observed a robust initial T cell response, but with a cost. “While transient disruption of this pathway may have therapeutic benefit because it temporarily ‘revs up’ the immune response, permanent loss of PD-1 signals seems to result in a ‘flame out’ where T cells can’t sustain higher level activation and become more dysfunctional,” Wherry says.

He explains, “The advantages in proliferation and other signalling pathways that cells had without PD-1 go away.” Without the regulatory influence of PD-1, the over activated and over stimulated T cells result in disruption of a crucial balance between different T cell types that leads to an overall greatly reduced immune response.

The work demonstrates that even with the clinical successes of blocking PD-1, there may be a better, more refined therapeutic strategy to target the PD-1 pathway.

“We know that transient blockade has tremendous benefit,” Wherry says. “But we also knew that there are subtypes of exhausted T cells that can or cannot be ‘revitalised’ by transient PD-1 blockade. Our new work shows that PD-1 signals help regulate this balance.”

PD-1 may preserve a “reserve force” of T cells

In effect, PD-1 may actually help to preserve a “reserve force” of T cells that can fight on later in the long-term cellular war between the immune system and foreign invaders or tumours.

Aside from helping to better design PD-1 blockade treatments, Wherry’s findings have also helped to identify potential biomarkers in the PD-1 signalling pathway. This additional information will help in the next steps of the research, which involve more detailed study of the PD-1 at different points in its pathway and with different viral or tumour loads.

“We still don’t know the molecular signals downstream of PD-1 in vivo or how PD-1 signals intersect with other immunotherapies,” Wherry says. “We are actively addressing these questions.”

The paper was published in the Journal of Experimental Medicine.