A cellular pathway may reduce side effects and extend immunotherapy duration in patients with the most common form of liver cancer. 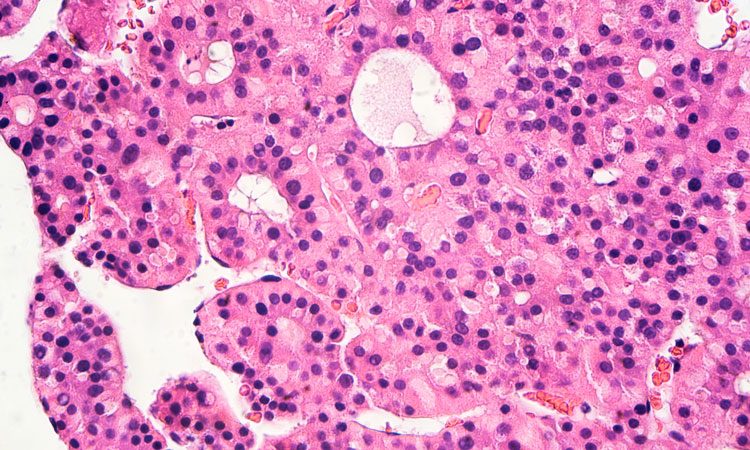 A cellular pathway has been discovered which may be beneficial in reducing side effects and extending the duration of immunotherapy in patients with hepatocellular carcinoma, the most common form of liver cancer.

Researchers from the University of Texas MD Anderson Cancer Center looked at a cellular pathway formed when the protein, interleukin-6 (IL-6), activates the enzyme, Janus kinase 1 (JAK1), and the potential for anti-IL-6 antibodies and anti-T-cell immunoglobulin mucin-3 (anti-Tim-3) in augmenting immunotherapy.

The IL-6/JAK1 pathway may play a role in cancer evasion by regulating a crucial cellular function in programmed death ligand 1 (PD-L1).

“Our results demonstrated that anti-IL-6 antibodies, when combined with anti-Tim-3 antibodies, boosted T-cell killing effects in mouse models,” said Li-Chuan Chan, PhD, a postdoctoral fellow in the Department of Molecular and Cellular Oncology “We identified a mechanism regulating PD-L1 glycosylation initiation, suggesting that a combination of anti-IL-6 and anti-Tim-3 as an effective marker-guided therapeutic strategy.”

“We also found that the IL-6/JAK1 pathway contributed to PD-L1 phosphorylation, which appeared to be the dominant driver of cancer immune evasion in a liver cancer mouse model,” continued Chan. “Together, these findings may provide a potential mechanism on how activated JAK1 translocates to other cellular compartments and warrant further investigation in the future.”

The study also pointed to a potential benefit for lessening immunotherapy side effects, which can sometimes shorten the time patients can stay on the treatment. Immune checkpoint inhibitors have been shown to stimulate the production of IL-6 serum, which can cause arthritis, Crohn’s disease and psoriasiform dermatitis.

“Therefore, blocking the IL-6 pathway may resolve these side effects and extend the duration of immunotherapy,” concluded Chan.

The results of the study were published in the 15 July online issue of the Journal of Clinical Investigation.