A potential target for ALS has been revealed by a study which found the Fos-B gene encouraged axonal branching.

A study has identified a pathological mediator of amyotrophic lateral sclerosis (ALS), which the researchers say could also have implications for understanding the molecular breakdown which causes other neurodegenerative diseases.

The research was conducted by a team from Tohoku University and Keio University School of Medicine, both Japan.

Previous studies have shown that in ALS patients, axons divide and branch abnormally, resulting in messages from motor neurons in the brain failing to reach their targets. Without connecting, the axons then shrivel, resulting in the loss of ability to control muscles. How the message is disrupted remains a mystery to researchers.

“However, among all the causative genes of ALS, one gene, called FUS, was confirmed to locate at axon ends,” lead researcher and co-author of the paper, Professor Masashi Aoki said, referring to the “wrist” of the motor neuron, between the part of the cell that collects the signal and the part that sends the message to the muscles.

Using stem cells from a patient with ALS, the researchers sequenced the genetic map of the motor neuron axons.

They found that a mutated version of FUS introduced what Aoki calls a toxic gain of function. It encouraged an abundance of another gene named Fos-B, which leads to axonal branching. 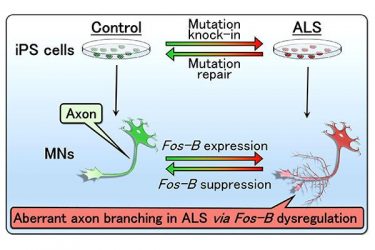 “This result suggests a promising target for which ALS-linked mutations cause axonal refraction and degeneration – one of the earliest events in the disease,” Aoki said, noting their results were in developing motor neurons. “We need more information to elucidate the relationship in mature motor neurons.”

The researchers say they will continue to investigate their findings, delving deeper into the effect of Fos-B on developed motor neurons.

The findings were published in EBioMedicine.