A new study has demonstrated the possibility of treating antibiotic-resistant Pseudomonas aeruginosa which causes sepsis in burn patients. 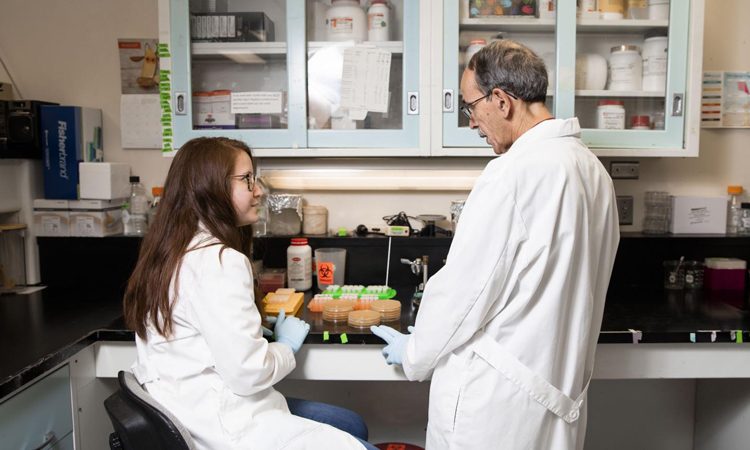 TTUHSC graduate student Taylor Lenzmeier (left) and Abdul Hamood, PhD, from the Texas Tech University Health Sciences Center School of Medicine, collaborated with others to investigate the feasibility of developing a topical treatment unrelated to conventional antibiotics that can be used to battle Pseudomonas aeruginosa (credit: TTUHSC).

Researchers have investigated the feasibility of developing a topical treatment unrelated to conventional antibiotics that can be used to battle Pseudomonas aeruginosa, a pathogen that causes sepsis in burn patients.

The research by Abdul Hamood, PhD, a professor for the Department of Immunology and Molecular Microbiology at the Texas Tech University Health Sciences Center (TTUHSC) School of Medicine and a team of collaborators used probiotic bacteria and its superior by-products to prevent Pseudomonas infection. This is because Pseudomonas aeruginosa has developed resistance to antibiotics.

“It’s almost this idea of using probiotics as an alternative to antibiotics,” explained Taylor Lenzmeier, a TTUHSC graduate student and the study’s lead author.

To accomplish this, the Hamood team examined the effectiveness of using a highly concentrated supernatant, or secreted liquid by-product, obtained from Lactobacillus gasseri strain 63 AM (LgCS). This supernatant is separated from the LgCS, concentrated and applied to the wound.

Furthermore, using another model of wound infection that does not involve thermal injury, the investigators discovered that treating an infected wound using either LgCS or ceftazidime significantly reduced the mortality rate in mice and treating the infected wound using a combination of LgCS and ceftazidime eliminated mortality in mice. Ceftazidime is an antibiotic used to treat meningitis and several other infections.

Hamood said the next step is to characterise the inhibitory factor that seems to produce such promising results. “Right now, it’s just a crude product and we proved that this crude product is very special,” Hamood said.

There’s a phenomenon occurring, but now we need to discuss and describe what’s causing it and even further, describe the mechanism of action to that wound.”

The study was published in the Journal of Medical Microbiology.