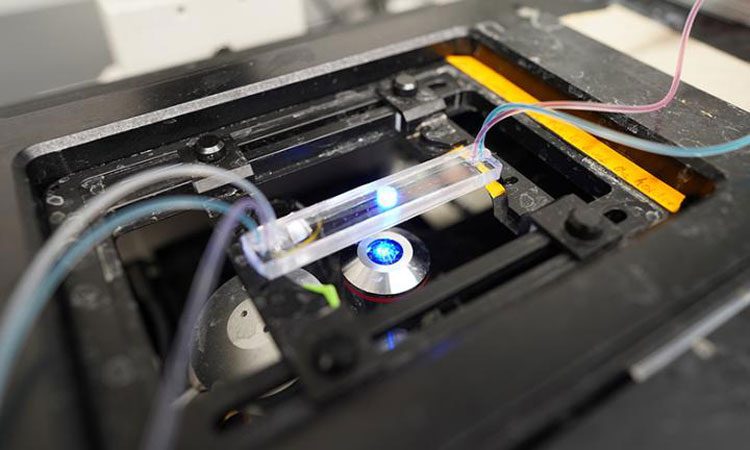 A new microfluidics device developed at UoT is capable of sorting one billion cells per hour based on their molecular makeup, vastly accelerating the discovery of new drug targets in cells (credit: Kelley lab at UoT).

A new platform, named microfluidic cell sorting (MICS), has been developed which enables researchers to screen the human genome faster when searching for genes, and their protein products, that can be targeted by drugs.

Shana Kelley, a University Professor in the Leslie Dan Faculty of Pharmacy at the University of Toronto, Canada combined her development of a portable, chip-like device that uses tiny magnets to sort large populations of mixed cell types with a CRISPR-based gene-editing technology, developed by Jason Moffat, a professor in the Donnelly Centre for Cellular and Biomolecular Research, Canada.

In one hour, MICS can collect precious rare cells, in which CRISPR revealed promising drug targets, from a large and mixed cell population. The same experiment would take 20-30 hours using the fastest method of fluorescence-based sorting.The two methods together, called MICS, can speed up screening of the human genome for potential drug targets.

Researchers can use CRISPR to switch off around 20,000 human genes and investigate how this affects levels of a disease-related protein. This can reveal other gene candidates, and the proteins they encode, that work in the same pathway; these can potentially be targeted with drugs to remove the target protein and halt cancer.

MICS works faster due to tiny magnets engineered to bind to the target protein, which leaves the cells sprinkled with magnetic particles. Its surface is streaked with strips of magnetic material that guide the cells from one end of the device to another. Once at the far end, the cells fall into distinct collection channels based on how many particles they carry as a proxy for the amount of the target protein.

Although Kelley’s team initially developed magnetic cell sorting for isolating tumour cells from the blood, its repurposing for drug target discovery could have a wider impact.

The study was published in Nature Biomedical Engineering.