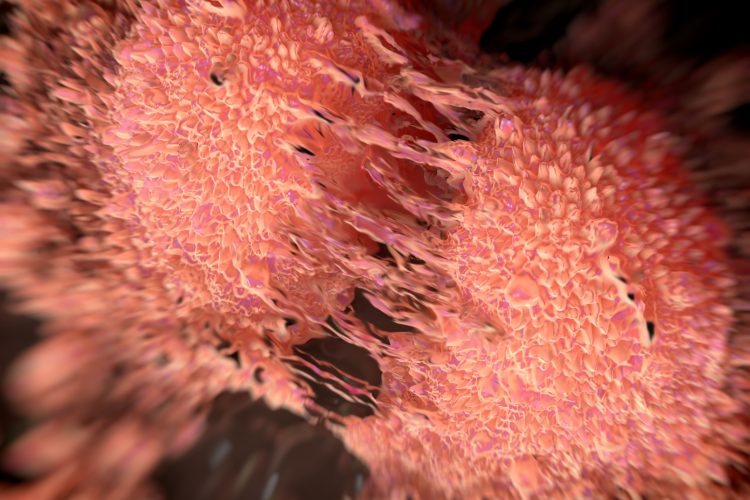 Researchers have identified that prostate cancer cells frequently have only one copy of PPP2R2A, a tumour suppressor gene essential for the mitosis checkpoint and that patients with this mutation survive for a shorter time. The team found that reinstatement of the PP2A protein, encoded for by PPP2R2A, not only stopped the unregulated division of cancer cells but also killed them, highlighting its potential as a new therapy.

Tumour suppressor genes (TSGs) encode proteins that work with other molecules in cells to prevent cell division when DNA damage or other defects are detected. This process prevents mutations that lead to uncontrolled cell growth and cancerous mutations being passed on. Under normal circumstances, TSGs only stop working when mutations affect both alleles. However, in this study, researchers have identified that loss of just one PPP2R2A allele is enough for prostate cancer caused by other mutations to uncontrollably metastasise.

“The majority of prostate tumours have only one functional copy of the PPP2R2A gene,” explained Dr Xavier Graña, Professor of Medical Genetics and Molecular Biochemistry in the Fels Institute for Cancer Research and Molecular Biology at the Lewis Katz School of Medicine at Temple University (LKSOM), US, where the research was conducted. “Because this alteration occurs so frequently, many patients could benefit from treatments that restore the gene’s activity.”

The scientists found that when PPP2R2A is lost, cells were more likely to divide and replicate because cells, no matter how disorganised, damaged or mutated their chromosomes were, could easily pass through the mitotic checkpoint which would normally halt cell division in these circumstances. The team also identified that PP2A reinstatement not only resulted in activation of the mitotic checkpoint halting cell division, but further collapsed the cellular machinery responsible for separating replicated chromosomes and killed the cells.

“Restoring PP2A to normal levels in these cancer cells caused a weakening of their centrosome, which is the organiser of the cell machinery in charge of faithfully separating chromosomes,” Dr Graña explained. “The combination of a sustained checkpoint and a weakened centrosome results in collapse of the mitotic apparatus, with chromosomes not knowing where they have to go.”

“Our findings indicate that prostate tumours often kick off a copy of the PPP2R2A gene to facilitate their growth and that bringing PP2A levels back to normal results in abnormal chromosome sorting and cell death.”

Small molecules that activate PP2A and have the potential to become new therapies have already been identified, but whether they specifically activate PP2A in prostate cancer remains unclear.

“More work is needed to find a specific drug for this complex, but we have a promising start,” Dr Graña added.

The study was published in Oncogenesis.