A study has shown that in mice, the GKT137831 drug makes tumours more sensitive to immunotherapy, so could be used to improve cancer treatments. 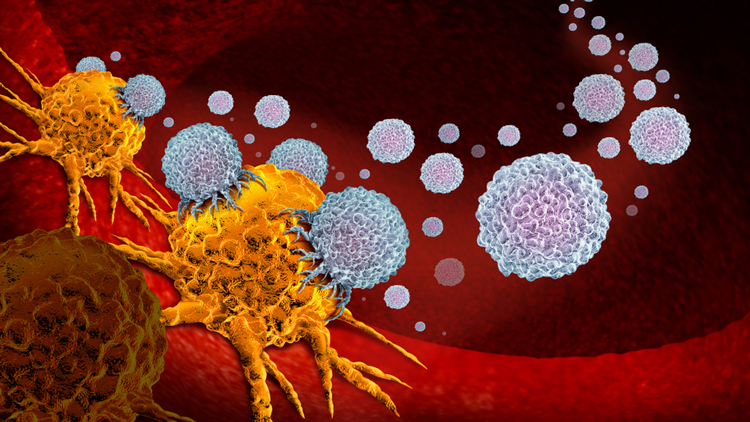 A drug originally developed to help tackle the scarring of organ tissue could help to improve the success rate of cancer immunotherapy treatments, according to researchers from the UK’s University of Southampton. Funded by Cancer Research UK, the research has demonstrated that in mouse cancers, GKT137831 (Setanaxib), can help break down the ‘barrier’ which makes many cancerous tumours resistant to immunotherapy drugs. GKT137831 is currently undergoing clinical trials for treatment of organ fibrosis. 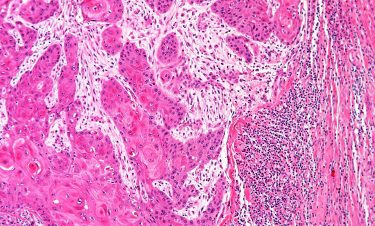 Human cancer under a microscope. The black dots on the right of the image are lymphocytes which are trying to get at the tumor, but are being stopped by cancer-associated fibroblasts (credit: University of Southampton).

The success of immunotherapy rests with ‘killer’ lymphocytes penetrating into a tumour to combat malignant cells. However, most patients fail to respond, often because the lymphocytes are blocked at the edge of the tumour, preventing their attack.

To overcome this, the team found that normal cells called cancer-associated fibroblasts (CAF) are hijacked by cancer cells to protect them from immune attack. Fibroblasts are healthy cells that normally maintain the structure of tissues, but when they are corrupted by cancer cells, they become CAFs and shield tumours from lymphocyte attack and stop immunotherapy from working effectively.

Previously, the group had identified that CAF formation depends on an enzyme called NOX4. In this study, they found that blocking NOX4 in mouse cancers, either genetically or with the drug GKT137831, could prevent and reverse CAF formation, allowing lymphocytes to infiltrate tumours and kill cancer cells. Combining immunotherapies with GKT137831 was effective in treating tumours that were previously resistant, significantly improving survival.

The researchers say their findings could form the basis for making cancers respond better to existing immunotherapy drugs and demonstrate the potential for greatly improved clinical outcomes in a significant number of cancers.

…blocking NOX4 in mouse cancers, either genetically or with the drug GKT137831, could prevent and reverse CAF formation”

Study author Professor Gareth Thomas, at the University of Southampton’s Centre for Cancer Immunology, commented: “Immunotherapy for cancer has been a very exciting development, but still doesn’t work in most patients. Our results suggest that in many cases, treatment resistance is caused by CAF and we think this can be overcome by targeting NOX4. GKT137831 hasn’t yet been tested on cancer patients, but we hope may give immunotherapy drugs a much better chance of fighting cancer cells effectively; this technique could hugely improve the success rate of cancer immunotherapy.”

Liz Allaway, from Cancer Research UK, said: “Immunotherapy is a promising cancer treatment that boosts the power of the body’s immune system against cancer, but unfortunately it doesn’t work for everyone. This exciting study showed that a drug, currently being tested for the treatment of another disease could make tumours in the lab more sensitive to immunotherapy. The next step would be to see if the drug has the same effect in people, which would open up immunotherapy as a treatment option for more people with cancer.”

The team’s findings are published in the journal Cancer Research.