Researchers have discovered that a small molecule can help some T cells combat tumours during PD-1 blockade immunotherapy in mice. 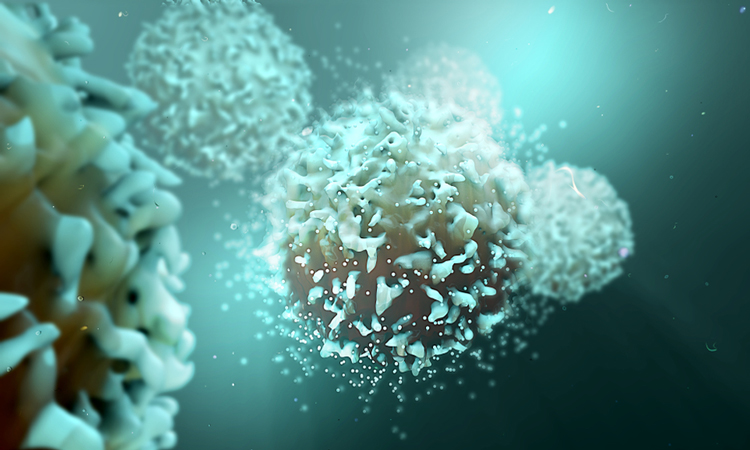 A small molecule that inhibits energy production in T cells allows some tumours in mice to escape treatment with an immunotherapy called PD-1 blockade therapy, says a new study from Kyoto University, Japan.

One kind of cancer immunotherapy blocks PD-1, a receptor on the surface of T cells. Cancer cells express a protein that binds to this receptor and interferes with T-cell ability to kill tumour cells. But while drugs that block this receptor can reactivate the T cells, they are not always effective.

“Despite the great success of PD-1 blockade therapy, we need to improve its efficacy because more than half of patients’ tumours don’t respond to it,” said lead author Alok Kumar, a PhD student in the Department of Immunology and Genomic Medicine at Kyoto University.

“We found that some human cancer cells release immunosuppressive molecules that inhibit the activity of energy-producing mitochondria in T cells,” Kumar explained. Treating the mice with a mitochondria-boosting compound reversed this effect in the immunesuppressing tumour.

However, the immunotherapy treatment had no effect on the other type of tumour. Instead of impairing energy production in T cells, the other tumour made itself invisible to the immune system by failing to produce a protein that helps immune cells recognise tumour cells.

The identity of the molecule that helped the first type of tumour suppress mitochondria is currently unknown. The researchers hope that if they can find it, they can create drugs that hinder its activity. “If we could identify these unknown factors and develop drugs that block them, we could save patients’ lives by using the drugs alongside PD-1 blockade therapy to prevent tumours from defending themselves,” says senior author Tasuku Honjo, Professor of Immunology and Genomic Medicine at Kyoto University.