Enhancing the speed of atomic force microscopy for biological samples

Researchers have applied for a patent for their innovative cantilever and vibrating plate technique which they say could increase the speed of atomic force microscopy on fragile samples. 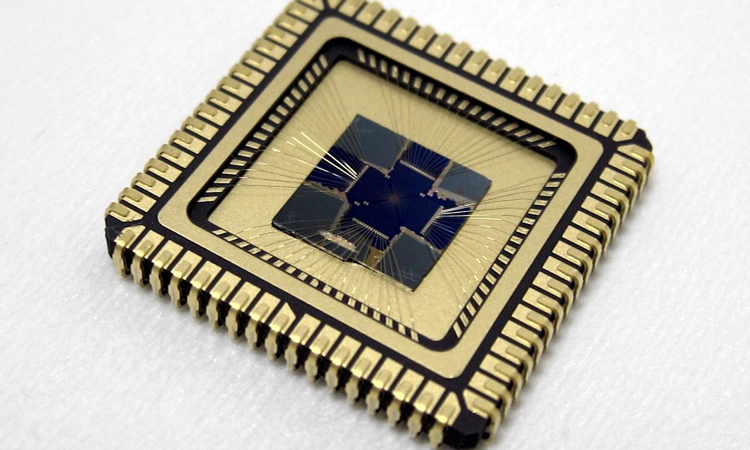 The chip (centre) in a frame (credit: TU Wien).

Researchers using atomic force microscopy to analyse biological samples have customised the technique to allow it to be both gentle enough to not destroy fragile samples, while increasing the speed of the measurements.

The scientists suggest their technique could speed up measurements to the point of it being used to create videos of sensitive objects, eg, living cells reacting to medications.

Atomic force microscopy, which involves bringing a vibrating tip into contact with or close to the sample surface, previously had the dilemma of choosing between fast imaging techniques, which run the risk of destroying sensitive samples and gentle imaging techniques that take more time.

However, researchers from the Faculty of Electrical Engineering and Information Technology at TU Wien, Austria, have developed a patent-pending solution: instead of the standard method, where a tiny vibrating arm with a fine tip analyses the sample, this technique involves vibrating a plate with a smaller customised arm with an ultra-fine tip attached to it.

“In an atomic force microscope, we use a tiny arm, known as a cantilever, which is just a few micrometres in size. When the cantilever is vibrated at its resonant frequency, it vibrates extremely quickly, typically a few hundred thousand times per second,” explained Professor Ulrich Schmid from the Institute of Sensor and Actuator Systems. He continued that the cantilever has an ultra-fine tip attached to it and when it comes close enough to the surface of the sample, a force acts between the two at the atomic level. This interaction alters the vibrational movement of the cantilever, a change that is measured and later analysed to create an image.

Measurements are taken point by point and the numerical values created from each part of a sample are then be combined into an image on the computer. The crucial factor for speed in this process is the stiffness of the cantilever; the stiffer the cantilever, the faster it can vibrate and the quicker a sample can be imaged. However, Professor Schmid explained: “The problem with this is that the stiffer and less flexible the vibrating part of the measuring apparatus is, the more likely it is to destroy the sample. For this reason, many biological samples could only previously be imaged using particularly gentle techniques, which take more time accordingly.”

According to the team, the new sensor works in liquids and can be applied anywhere where high measuring speeds are required for soft materials or surfaces.

In future, it is intended to be used for biological samples or biochemical processes, but it could also play an important role in material research.

The paper was published in Nature.