Researchers have discovered a small molecule, known as CLR01, that attacks the HIV virus and disrupts the amyloids in semen that promote HIV infection… 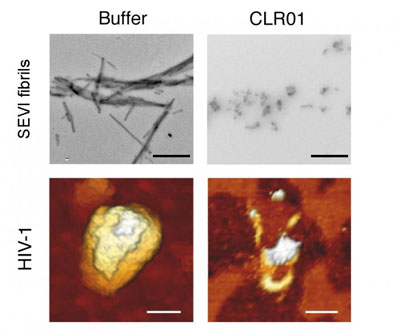 HIV is most commonly transmitted between individuals in semen which contains deposits of protein fragments called amyloid fibrils.

A team led by researchers from the University of Pennsylvania and Ulm have discovered a small molecule that attacks the HIV virus and disrupts the amyloids in semen that promote HIV infection.The tweezer-shaped molecule, called CLR01, can both disrupt fibril formation and disassemble fibrils that have already formed.

CLR01 prevents HIV particles from interacting with fibrils by disrupting the membranes that surround the virus particles and can displace the virus particles that have already bound to the fibrils. In the presence of CLR01, human cells exposed to semen that contained HIV were at least 100-times less likely to become infected with the virus.

The next step could be to assess safety and efficacy in non-human primates. “We think that CLR01 could be more effective than other microbicides that are in development because of its dual action, its safety in terms of side effects and its potential broad application,” Shorter said.

“The tweezer has been tested and is safe in zebrafish and mice. The next step could be to assess safety and efficacy in non-human primates,” says Professor Jan Münch from the University of Ulm.

The study findings are published in eLife.