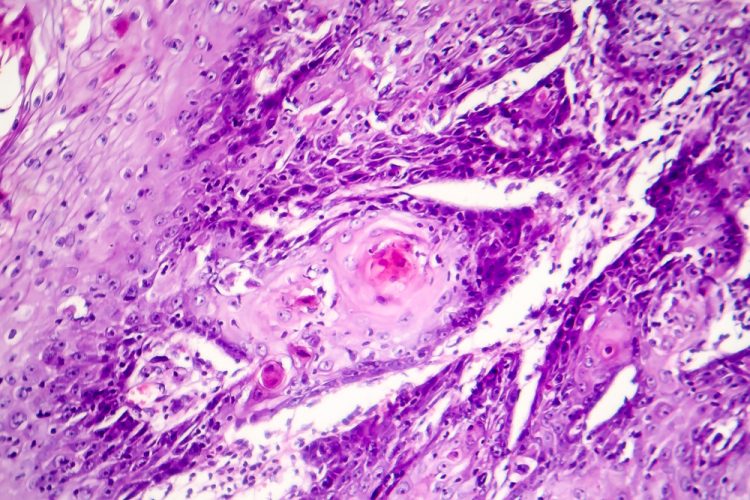 Novel drug targets for cutaneous squamous cell carcinoma (cuSCC) have been identified by researchers. The team demonstrated in a murine model that TAp63, a tumour suppressor protein in the p53 family and the micro RNAs (miRNAs) TAp63 helps create can slow the development and growth of cuSCC tumours.

Researchers at the H. Lee Moffitt Cancer Center & Research Institute, US, attempted to better understand how cuSCC develops focused on the role of TAp63 in cancer progression. TAp63 is a tumour suppressor protein that acts to inhibit tumour growth and development and has been shown to compensate for the loss of its related p53 tumour suppressor protein. TAp63 is also known to play a role in the creation of miRNAs that are often deregulated in cancers. These miRNAs contribute to many biological processes, including cell death and proliferation or growth.

The paper published in Cancer Research reveals how the team deleted the TAp63 gene from mice and then exposed them to ultraviolet (UV) light, the primary environmental risk factor for developing cuSCC. Compared to normal mice irradiated with UV, those without the TAp63 gene developed a significantly higher number of cuSCCs.

Further comparative studies in both murine and human cuSCC tumour samples demonstrated that two miRNAs – miR-30c-2* and miR-497 – were expressed at much lower levels in tumours that lacked TAp63. When they reintroduced these miRNAs into the tumour cells, the development of the cuSCCs was significantly reduced, suggesting that, similarly to TAp63, they may inhibit the growth and development of cuSCCs.

The researchers verified their hypothesis by demonstrating that that miR-30c-2* contributes to cell death, while miR-497 inhibits cell growth and proliferation.

The scientists also studied how the downstream targets of the miRNAs impact cuSCC growth. They demonstrated that seven genes targeted by the miRNAs are commonly deregulated in cuSCC tumours, including the AURKA gene. When they inhibited AURKA, cuSCC growth was reduced in the murine models, suggesting AURKA could be a therapeutic drug target in future.

“Our study establishes TAp63 as an essential suppressor of UV-induced cuSCC and reveals a previously undescribed functional network of microRNAs and targeted mRNAs,” said Dr Elsa Flores, chair of Moffitt’s Department of Molecular Oncology and leader of the Cancer Biology and Evolution Program. “Given the lack of US Food and Drug Administration (FDA) approved targeted therapies for advanced cuSCC, our study provides pre-clinical evidence for the use of miR-30c-2*/miR-497 delivery or AURKA inhibition for the effective treatment approach.”

Flores stated she hopes their research will lead to further investigation of the potential targets they identified.