The autonomous robot scientist can independently perform experimental procedures and makes its own decisions about which tests to perform. 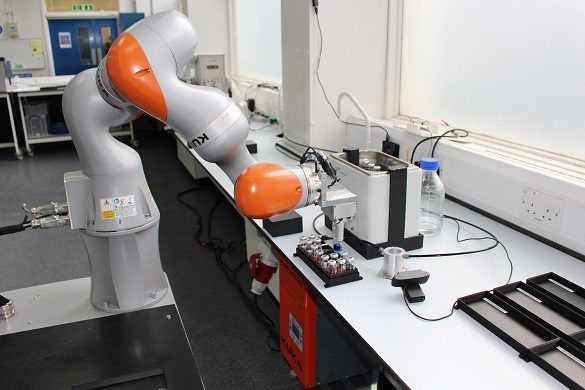 Researchers have built an intelligent, mobile robot scientist. The 1.75-meter-tall researcher can work continuously, deciding which experiments need to be carried out and performing them without the need for human intervention.

According to the team, the robot makes its own decisions about which chemistry experiments to perform next, based on the results from previous investigations, using a search algorithm to navigate a 10-dimensional space of more than 98 million candidate experiments. This allowed it to autonomously discover a catalyst that is six times more active, with no additional guidance from the research team.

The robot roams the laboratory, using equipment designed for human operations and is unlike models which have come before, able to perform a wide range of tasks, while previous robots have typically been hardwired for a specific experiment.

Its creators hope that the robot researcher could tackle problems of a scale and complexity that are currently beyond our grasp, such as finding new drug formulations by searching vast, unexplored chemical spaces.

The automated researcher uses a combination of laser scanning coupled with touch feedback for positioning, rather than a sight system.

The robot independently carries out all experimental procedures, including weighing out solids, dispensing liquids, removing air from the vessel, running the catalytic reaction and quantifying the reaction products.

University of Liverpool, UK, PhD student Dr Benjamin Burger, who built and programmed the robot, said: “The biggest challenge was to make the system robust. To work autonomously over multiple days, making thousands of delicate manipulations, the failure rate for each task needs to be very low. But once this is done, the robot makes far fewer mistakes than a human operator.”

Professor Andrew Cooper from the University’s Department of Chemistry and Materials Innovation Factory in Liverpool, who led the project, added: “Our strategy here was to automate the researcher, rather than the instruments. This creates a level of flexibility that will change both the way we work and the problems we can tackle. This is not just another machine in the lab: it’s a new superpowered team member, and it frees up time for the human researchers to think creatively.”

Related organisations
the University of Liverpool

the University of Liverpool