Researchers reveal how coronaviruses use protein vibrations to enter cells

Using atomistic simulations, a team has demonstrated how coronavirus Spike proteins move and vibrate to let the virus through cell walls. 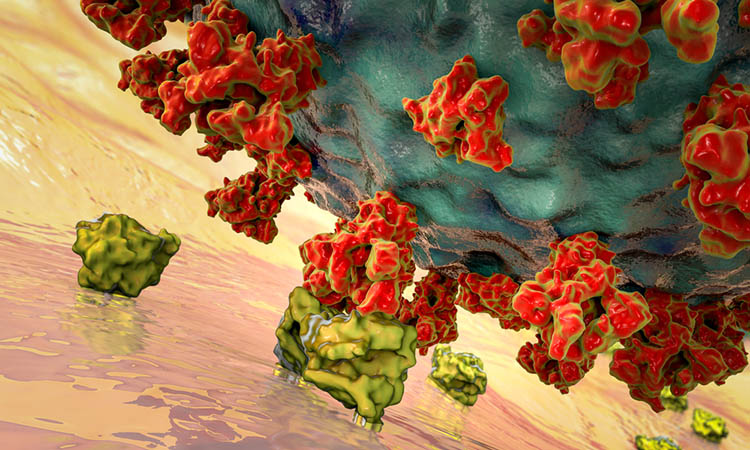 New research has found a potential strategy that coronaviruses, including SARS-CoV-2 which causes COVID-19, may use to trick cells into letting the viruses inside. According to the researchers, the findings could be useful for determining how dangerous different strains or mutations of coronaviruses may be and might point to a new approach for developing treatments.

The study was conducted at the Massachusetts Institute of Technology (MIT), US. Using atomistic simulations, the researchers looked at the mechanical aspects of how the coronavirus Spike (S) proteins move, change shape and vibrate. The results indicate that these vibrational motions could trick a locking mechanism on the cell’s surface into letting the virus through the cell wall so it can hijack the cell’s reproductive mechanisms.

The team say that the tiny nanoscale vibrations and shape changes of these protein molecules are extremely difficult to observe experimentally, so atomistic simulations are useful in understanding what is taking place. The researchers applied this technique to look at a crucial step in infection, when a virus particle with its S protein attaches to a human cell receptor called the angiotensin-converting enzyme 2 (ACE2) receptor. Once these S proteins bind with the receptor, it unlocks a channel that allows the virus to penetrate the cell.

The researchers say that the binding mechanism between the proteins and the receptors works like a lock and key, which is why the vibrations matter.

“If it is static, it just either fits or it does not fit,” Professor Markus Buehler, one of the lead researchers. However, the S proteins are not static: “they’re vibrating and continuously changing their shape slightly and that is important.”

Buehler and Yiwen Hu, another researcher, modelled the vibrational characteristics of these protein molecules and their interactions, using analytical tools such as normal mode analysis. This method is used to study the way vibrations develop and propagate, by modelling the atoms as point masses connected to each other by springs that represent the various forces acting between them.

They found that differences in vibrational characteristics correlate strongly with the different rates of infectivity and lethality of different kinds of coronaviruses, taken from a global database of confirmed case numbers and case fatality rates. The viruses studied included Severe Acute Respiratory Syndrome (SARS-CoV), Middle East Respiratory Syndrome (MERS-CoV), SARS-CoV-2, and of one known mutation of the SARS-CoV-2 virus that is becoming increasingly prevalent around the world. 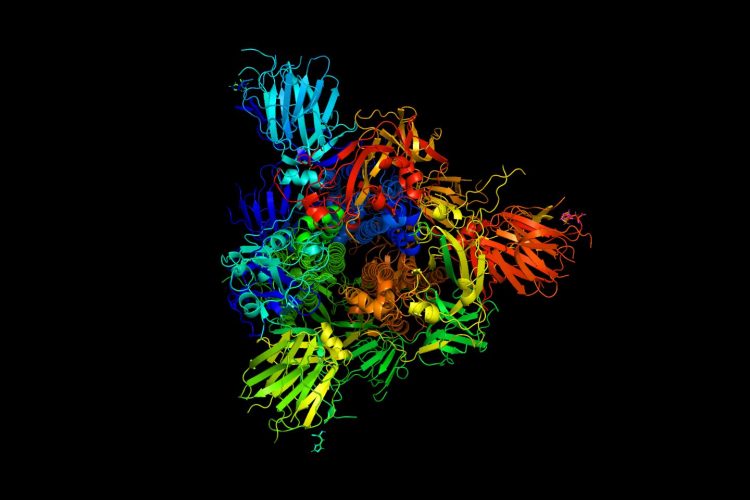 New research at MIT shows that vibrations of the S protein on coronaviruses, including the one that causes COVID-19, play a crucial part in allowing the virus to penetrate human cells [credit: Markus Buehler and Yiwen Hu/MIT].

In all the cases they studied, a crucial part of the process is fluctuations in an upward swing of one branch of the protein molecule, which helps make it accessible to bind to the receptor, the researchers say. Another key indicator has to do with the ratio between two different vibrational motions in the molecule.

“We find that these two factors show a direct relationship to the epidemiological data, the virus infectivity and also the virus lethality,” Hu said. “You can just look at the fluctuations of these S proteins and find out how they may act on the epidemiological side, like how infectious and how serious would the disease be.”

Potentially, these findings could also provide a new avenue for research on possible treatments for COVID-19 and other coronavirus diseases, Buehler said. He speculates that it might be possible to find a molecule that would bind to the S proteins in a way that would stiffen them and limit their vibrations. Another approach might be to induce opposite vibrations to cancel out the natural ones in the S proteins.

The study was published in Matter.