A new non-invasive microscopic fluorescence imaging method has been developed to reveal details of the brain in animal models of various diseases. 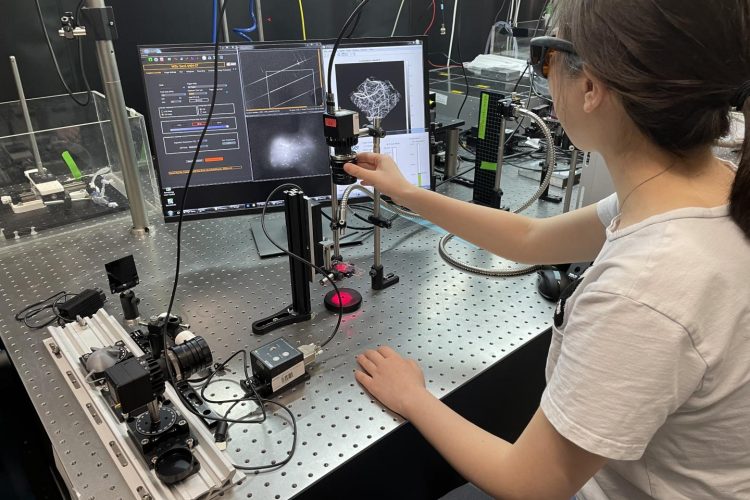 Researchers have developed a new technique that allows microscopic fluorescence imaging at four times the depth limit imposed by light diffusion. The method was created at the University of Zurich and ETH Zurich, both Switzerland.

The team explain that fluorescence microscopy is often used to image molecular and cellular details of the brain in animal models of various diseases but, until now, has been limited to small volumes and highly invasive procedures due to intense light scattering by the skin and skull.

“Visualisation of biological dynamics in an unperturbed environment, deep in a living organism, is essential for understanding the complex biology of living organisms and progression of diseases,” said research team leader Daniel Razansky. “Our study represents the first time that three-dimensional (3D) fluorescence microscopy has been performed fully non-invasively at capillary level resolution in an adult mouse brain, effectively covering a field of view of about 1cm.”

The researchers call the new technique diffuse optical localisation imaging (DOLI). It takes advantage of what is known as the second near-infrared (NIR-II) spectral window from 1,000 to 1,700 nanometres, which exhibits less scattering. 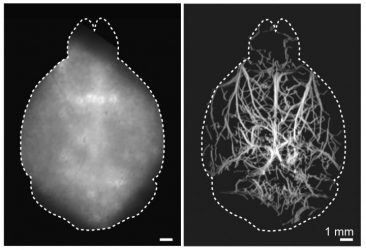 A new imaging method can capture images of vasculature deep in the brains of mice. A conventional widefield fluorescence image of the mouse brain taken non-invasively in the visible light spectrum is shown on the left, while the non-invasive localisation-based DOLI approach operating in the NIR-II spectral window is shown on the right [credit: Daniel Razansky, University and ETH Zurich].

For the new technique, the researchers intravenously inject a living mouse with fluorescent microdroplets at a concentration that creates a sparse distribution in the blood stream. Tracking these flowing targets enables reconstruction of a high-resolution map of the deep cerebral microvasculature in the mouse brain.

“The method eliminates background light scattering and is performed with the scalp and skull intact,” said Razansky. “Interestingly, we also observed strong dependence of the spot size recorded by the camera on microdroplet’s depth in the brain, which enabled depth-resolved imaging.”

The new approach benefits from the recent introduction of highly efficient short-wave infrared cameras based on InGaAs sensors. Another key building block was the use of novel contrast agents exhibiting strong fluorescence responses in the NIR-II window, such as lead sulphide (PbS)-based quantum dots.

The researchers first tested the new technique in synthetic models of tissue known as tissue phantoms that mimic average brain tissue properties, demonstrating that they could acquire microscopic resolution images at depths of up to 4mm in optically opaque tissues. They then performed DOLI in living mice where cerebral microvasculature as well as blood flow velocity and direction could be visualised entirely non-invasively.

The researchers are working to optimise precision in 3D to improve DOLI’s resolution. They are also developing improved fluorescent agents that are smaller, have stronger fluorescence intensity and are more stable in vivo. This will significantly boost DOLI’s performance in terms of the achievable signal to noise and imaging depth.

“We expect that DOLI will emerge as a powerful approach for fluorescence imaging of living organisms at previously inaccessible depth and resolution regimes,” said Razansky. “This will greatly enhance the in vivo applicability of fluorescence microscopy and tomography techniques.”

The study was published in Optica.