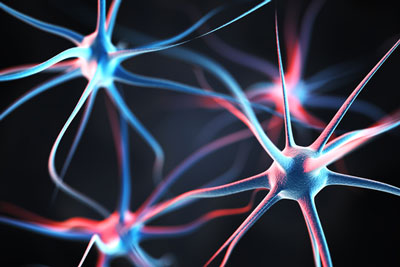 Scientists from the Florida campus of The Scripps Research Institute (TSRI) have shed light on the role that the nervous system plays in controlling energy balance.

“Our new study has identified novel populations of nerve cells that regulate appetite, thermogenesis and physical activity,” said TSRI Professor Baoji Xu, who led the research. “We think these neurons could be targets for drug development.”

In the new study, Xu and his colleagues examined several groups of neurons that express a substance called “brain-derived neurotrophic factor” (BDNF) within a small brain region called the paraventricular hypothalamus.

BDNF is an extremely important protein in the brain and is involved in a number of functions. It has been shown that deleting the BDNF gene causes significant problems, among them, dramatically increased appetite (hyperphagia) and severe obesity.

The new study shows that deleting the BDNF gene also impairs thermogenesis—the ability of cells to burn fat to produce heat. The study further reveals two distinct types of BDNF neurons—those that control appetite or satiety and those that control thermogenesis. Not only do these two groups play different biological roles, they are located in two separate sections of the paraventricular hypothalamus brain region.

This “geographical” split raises some interesting questions. “We don’t yet know what the distinctive placement means to the control of body weight, nor do we know if these two clusters of neurons communicate with each other as yet,” said Juanji An, the first author of the study and a member of the Xu lab. “But given the fact that mice and humans with mutations in the BDNF gene or its receptor develop severe obesity, a better understanding of the mechanism underlying the effect BDNF has on body weight could provide great insights into the regulation of energy balance.”

Xu is also hopeful about the potential of BDNF as a drug target. “Our findings suggest that activation of each of these two populations of neurons should powerfully suppress appetite or promote energy expenditure,” he said. However, he cautions that because BDNF’s functions are so widespread, a good drug candidate would need to closely target only BDNF-expressing neurons in the paraventricular hypothalamus, thus limiting potential side effects.

The findings are published in the journal Cell Metabolism.