Scientists at Helmholtz Zentrum München have discovered that Epstein-Barr virus (EBV) conceals itself in human cells using the LMP2A protein. 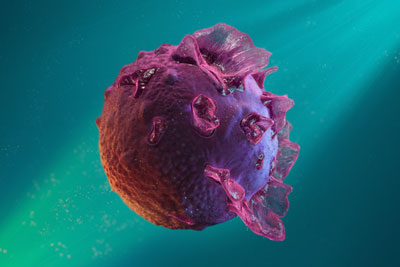 The scientists found that the protein LMP2A appears to help EBV-infected cells hide from T cells. This camouflage through the LMP2A protein may play a major role in the causation of cancer by EBV.

“We suspected that a viral protein was behind EBV’s camouflage in cancerous cells“, says Dr Andreas Moosmann from the Research Unit Gene Vectors at Helmholtz Zentrum München. “Right away, LMP2A seemed quite suspicious to us. This protein keeps appearing in different forms of EBV infection, but it was never totally clear what it’s doing there.”

This prompted Moosmann, who heads the newly established research group ‘Host control of viral latency and reactivation’ of the German Centre of Infection Research, to search for links between LMP2A and the immune system.

“Cancer cells express only a few of the viral proteins,” explains Dr Chiara Rancan, who is the first author of the study. “In most cases, LMP2A is one of them.”

In their experiments, immune cells recognised infected cancer-like cells much better whenever the scientists knocked out LMP2A.

About 95% of humans have acquired EBV when they reach middle age and keep it for life. Most stay healthy but several types of cancer can be caused by EBV, including nasopharyngeal carcinoma and many cases of Hodgkin Lymphoma. The protein LMP2A may weaken the immune response against these cancers and thus contribute to their outbreak.

“We want to make a contribution to better understand EBV disease”, Moosmann says. “We hope that this will be a basis for new therapies.”

The research is published in the journal PLOS Pathogens.