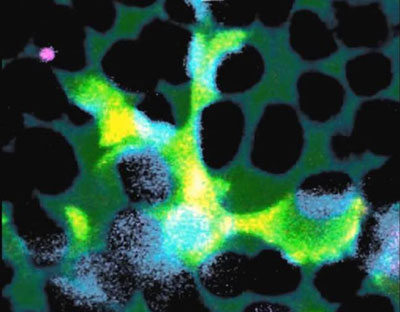 Microglia inside the brain, spinal cord and eye hunt for invaders, capturing and then devouring them.

These cells often play a beneficial role by helping to clear trash and protect the central nervous system against infection. But a new study by researchers at the US National Eye Institute (NEI) shows that they also accelerate damage wrought by blinding eye disorders, such as retinitis pigmentosa.

“These findings are important because they suggest that microglia may provide a target for entirely new therapeutic strategies aimed at halting blinding eye diseases of the retina,” said NEI Director, Paul A. Sieving, M.D. “New targets create untapped opportunities for preventing disease-related damage to the eye, and preserving vision for as long as possible.”

Retinitis pigmentosa, an inherited disorder that affects roughly 1 in 4,000 people, damages the retina, the light-sensitive tissue at the back of the eye. Research has shown links between retinitis pigmentosa and several mutations in genes for photoreceptors. In the early stages of the disease, rod photoreceptors, which enable us to see in low light, are lost, causing night blindness. As the disease progresses, cone photoreceptors, which are needed for sharp vision and seeing colors, can also die off, eventually leading to complete blindness.

Lead investigator, Wai T. Wong M.D., Ph.D., chief of the Unit on Neuron-Glia Interactions in Retinal Disease at NEI, and his team studied mice with a mutation in a gene that can also cause retinitis pigmentosa in people. The researchers observed in these mice that very early in the disease process, the microglia infiltrate a layer of the retina near the photoreceptors, called the outer nuclear layer, where they don’t usually venture. The microglia then create a cup-like structure over a single photoreceptor, surrounding it to ingest it in a process called phagocytosis. Wong and his team caught this dynamic process on video. The whole feast, including digestion, takes about an hour.

Phagocytosis is a normal process in healthy tissues and is a key way of clearing away dead cells and cellular debris. However, in retinitis pigmentosa the researchers found that the microglia target damaged but living photoreceptors, in addition to dead ones. To confirm that microglia contribute to the degeneration process, the researchers genetically eliminated the microglia, which slowed the rate of rod photoreceptor death and the loss of visual function in the mice. Inhibiting phagocytosis with a compound had a similar effect. The microglia seem to ignore cone photoreceptors, which fits with the known early course of retinitis pigmentosa.

What triggers microglia to go on this destructive feeding frenzy? Wong and colleagues found evidence that photoreceptors carrying mutations undergo physiological stress. The stress then triggers them to secrete chemicals dubbed “find me” signals, which is like ringing a dinner bell that attracts microglia into the retinal layer. Once there, the microglia probe the photoreceptors repeatedly, exposing themselves to “eat me” signals, which then trigger phagocytosis. In response to all the feasting, the microglia become activated. That is, they send out their own signals to call other microglia to the scene and they release substances that promote inflammation.

Other potential treatments for retinitis pigmentosa, such as gene therapy, are progressing, but are not without challenges. Gene therapy requires replacing defective genes with functional genes, yet more than 50 distinct genes have been linked to the disease in different families, so there’s no one-size-fits-all gene therapy. A therapy targeting microglia might complement gene therapy because it’s an approach that’s independent of the specific genetic cause of retinitis pigmentosa, said Wong.

The findings are published in the journal EMBO Molecular Medicine.