Researchers placed cancer cells in a three-dimensional scaffold and subjected them to the forces that push, pull and continually flow through the body… 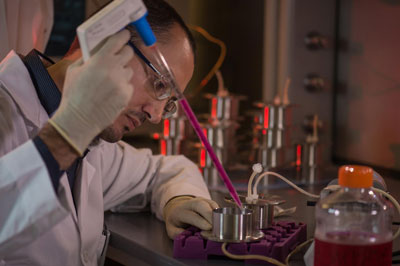 Rice University graduate student Marco Santoro fills a custom bioreactor with fluid as he prepares to test bone cancer cells embedded in a scaffold. The technique allows researchers to monitor the spread of cancer cells in more natural environments than can be achieved in two-dimensional cultures. CREDIT: Jeff Fitlow/Rice University

Researchers have developed a way to mimic the conditions under which cancer tumours grow in bones.

By placing cancer cells in a three-dimensional scaffold and subjecting them to the forces that push, pull and continually flow through the body, the researchers, from Rice University and University of Texas MD Anderson Cancer Centre, are better able to test the efficiency of cancer-fighting drugs.

The scientists discovered that bone tumours exposed to normal forces express more of a protein, insulin-like growth factor-1 (IGF-1), than detected in static cultures. The IGF-1 signalling pathway plays a critical role in resistance to current chemotherapy. The experiments were performed in a custom-made bioreactor by the Rice lab of bioengineer Antonios Mikos in collaboration with the MD Anderson lab of Joseph Ludwig.

The study shows the value of incorporating mechanical forces when modelling tumours and treatments as opposed to analysing tumour growth statically, said Marco Santoro, a chemical and biomolecular engineering graduate student of Mikos.

Tumour cells change their function depending on the forces they sense

“Mechanical forces are present in our bodies even though we are not always aware of them,” he said. “Our cells are sensitive to the forces around them and change their behaviour accordingly. Tumour cells behave the same way, changing their function depending on the forces they sense.”

Mikos and his team specialise in materials and strategies for tissue engineering and regenerative medicine. As part of that work, they have created foam-like materials that serve as scaffolds for cells to inhabit and grow into as they become new bone or tissue. That material provided an opportunity for the latest experiments on bone tumour samples called sarcomas. Sarcoma tumours are most often found in the bones of adolescents and young adults.

The researchers placed sarcoma cells in their porous, biologically inert scaffold and put the scaffold inside a flow perfusion bioreactor to mimic the stimulation those cells would experience amid the tissue inside real bone. They subjected the cells to biomechanical stimuli, including shear stress, by changing the fluid viscosity and flow rate. Over 10 days they found the steady flow of fluid through the scaffold prompted the sarcoma cells to proliferate throughout the structure. The higher shear stress helped the cells significantly increase their production of the IGF-1 protein and also down-regulated the production of two other cancer-related proteins, c-KIT and HER2, compared with static tests.

They also discovered that adjusting parameters in the bioreactor influenced the cells’ sensitivity to Dalotuzumab, a drug that disrupts the IGF-1 pathway. Higher shear stress appeared to decrease the drug’s effectiveness due to the associated increase in IGF-1 production.

“For the first time, we showed how the effect of the drug changes according to the forces experienced by the cells,” Santoro said. “IGF-1 is crucial for this kind of sarcoma, which relies on this mechanism for growth. We show that the higher the mechanical stimulation, the more pronounced the secretion of this particular protein.”

Mikos said the experiments should set a good example for cancer studies. “These experiments have to be tailored for each cancer, because the forces that cells experience vary in different parts of the body,” he said. “In the lungs, they wouldn’t be the same as in the bones. But they give researchers a far more realistic way to mimic the tumour’s local environment.”