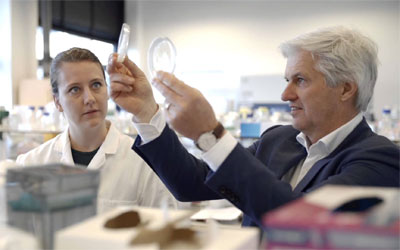 Merus, a leader in developing best-in-class bispecific antibody therapeutics to treat cancer patients, announced that it won its inequitable conduct trial against Regeneron. In a decision issued on Thursday, August 6, Judge Katherine B. Forrest of the U.S. District Court for the Southern District of New York indicated that Regeneron engaged in inequitable conduct in connection with obtaining U.S. Patent No. 8,502,018. This marks the third counterclaim upon which Merus has prevailed in this litigation, initiated by Regeneron.

In December 2014, Regeneron conceded that Merus does not infringe any claim of the ‘018 patent, and that the patent is invalid in view of the Court’s prior decision on claim construction. Given the Court’s ruling on August 6, Regeneron’s patent has now been adjudged to be not infringed, invalid and unenforceable for being procured by inequitable conduct.

“We are very pleased with the Court’s decision in our favor,” said Ton Logtenberg, CEO of Merus. “From the outset Merus maintained that the ‘018 patent is invalid, not infringed and was procured by inequitable conduct. And despite Regeneron’s concession on two of those points, Merus felt compelled to press its inequitable conduct claim because as a U.S. patent-holder itself, Merus does not believe that Regeneron’s patent should have been permitted to issue and interfere with any company’s legitimate business. This case has imposed substantial burden on Merus, which was clearly unjustified. Our company remains uniquely positioned to develop best-in-class bispecific antibody therapeutics for the treatment of cancer patients.”