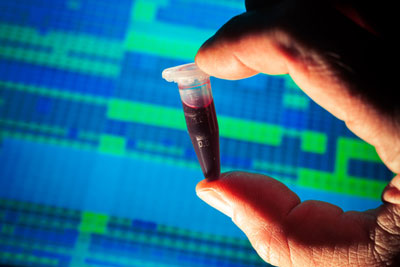 A new study, led by researchers at The Institute of Cancer Research, London, has found that testing for as few as nine genetic risk factors could improve treatment for myeloma by helping doctors identify patients at risk of developing more aggressive disease.

The research is the first to link genetic mutations in myeloma cells to the chances of surviving the disease.

Researchers used genetic sequencing to analyse all of the genes of 463 patients enrolled in the Myeloma XI clinical trial. The study identified 15 genes that were significantly mutated in a subset of patients with myeloma – and mapped how having these mutations related to long-term survival. They found that testing for nine of these mutated genes, in combination with a test to determine the stage of myeloma, identified 90% of patients with very aggressive disease who died prematurely.

DNA repair gene TP53 was found to be faulty in 11% of the patients, and was also associated with a shorter survival time – 54% of patients with TP53 mutations survived more than two years.

The most common genetic faults in myeloma were found to be errors in members of the RAS gene family, one of which was discovered at the ICR, and which are defective in many cancer types. The researchers discovered mutations in the genes NRAS and KRAS in 43% of patients – suggesting that in myeloma RAS mutations drive cells to become cancerous, and potentially opening up new avenues for treatment.

Strikingly, over 50% of the mutations identified in the study can be targeted by new or existing cancer drugs developed for other cancer types – opening up potential new avenues for targeted treatment.

The scientists also found that patients with myeloma who had errors in some genes had a more favourable outlook. All the patients in the study with mutations in the genes IRF4 and EGR1 survived more than two years, compared with 79 and 78 % of patients with error-free copies of the genes, respectively.

Study leader Professor Gareth Morgan, who conducted the research as Professor of Haematology at The Institute of Cancer Research, London, said, “Our study has identified genetic features which can identify those patients whose myeloma is likely to prove aggressive and to progress quickly.

“We hope our study ultimately paves the way for genetic testing to pick out the minority of patients with myeloma with a poor prognosis, who might benefit from the most intensive possible treatment.”

Eric Low, Chief Executive of Myeloma UK, said, “The results of this innovative and first-of-its kind genetic study are pivotal. Myeloma patients with aggressive, high-risk disease experience suboptimal outcomes and poorer overall survival, so identification of this group of patients at diagnosis is crucial. These results will lead to the development of new, and the better use of existing treatments, to overcome high-risk, aggressive myeloma and therefore improve survival in this important sub-group of patients.”

The study findings are published in the Journal of Clinical Oncology.