Physiologists from the University of Zurich have now discovered why the intestinal bacterium E. coli multiplies heavily and has an inflammatory effect… 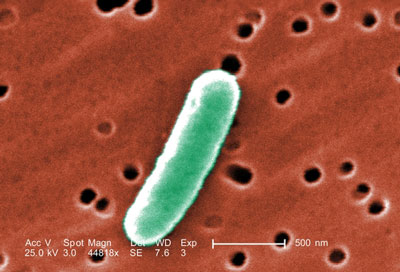 Trillions of bacteria populate the human gut – which makes them more common than any other cells in our body.

The composition of this bacterial population is very variable and influenced by our diet. Diseases, but also antibiotic treatments can induce significant shifts in this equilibrium. If entire bacterial groups suddenly multiply heavily, critical situations occur. They damage the intestinal tissue and cause inflammations. How such shifts are triggered largely remained a mystery. Physiologists from the University of Zurich have now discovered why the intestinal bacterium Escherichia coli (E. coli) multiplies heavily and has an inflammatory effect.

In their normal state, E. coli are harmless and only make up around 0.1 percent of the intestinal flora. If present in large amounts, however, they can cause diarrhoea or a serious intestinal inflammation. The Zurich study reveals that an overproduction of E. coli can be attributed to the availability of the carbohydrate sialic acid, which is found in large amounts in the proteins of the intestinal mucosa. To actually be able to utilise the sialic acid, the bacteria enlist the aid of the enzyme sialidase, which is released by other intestinal bacteria. “It’s striking that E. coli doesn’t produce this kind of enzyme itself,” explains Thierry Hennet, a professor from the Institute of Physiology at the University of Zurich.

Derivatives of flu agents could be used for inflammatory intestinal diseases

Hennet and his colleagues succeeded in demonstrating the complex chain of events involved in a severe inflammation triggered by E. coli: An injury to the intestinal mucosa initially causes the increased multiplication of a non-pathogenic bacteria, which emits sialidase. This increased enzyme production releases sialic acid, which facilitates an overproduction of E. coli and can thus cause intestinal inflammation.

The researchers also discovered that the intake of a sialidase inhibitor prevents the excessive formation of E. coli and was thus able to alleviate the disease symptoms. Interestingly, such sialidase inhibitors were already developed against the influenza virus. “Derivatives of known flu agents such as Tamiflu and Relenza could therefore also be used for inflammatory intestinal diseases, which opens up new therapeutic possibilities,” says Hennet.

The study findings are publishing in Nature Communications.