Acrolein may prevent the process of fibrillation in Alzheimer’s disease 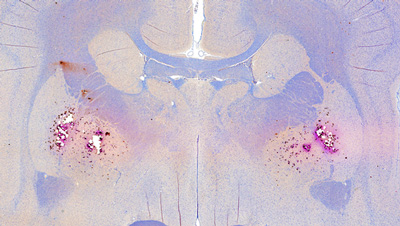 Scientists have discovered that acrolein – a toxic substance produced in cells during times of oxidative stress – may play a role in preventing the process of fibrillation, an abnormal clumping of peptides that has been associated with Alzheimer’s disease and other neural diseases.

The key to this new role, say the scientists from RIKEN in Japan, is a chemical process known as 4+4 cycloaddition, where two molecules with “backbones” made up of four-atom chains come together to form a ring-like structure with eight atoms. The group found that in some circumstances, acrolein can combine with a class of molecules called polyamines, which themselves are important biological players, to make substances that can prevent the fibrillation of Aβ40 peptides.

Ayumi Tsutsui commented: “What is remarkable is that the reaction involves acrolein and a class of substances known as polyamines, which are all associated with oxidative stress. Polyamines are known to play very important biological roles, but the mechanisms are still poorly understood.”

Levels of acrolein have been found to correlate with the progression of diseases such as cancer and stroke. According to Tamotsu Zako of Ehime University, who participated in the research: “It made sense to see acrolein simply as a dangerous substance that triggers disease, and many researchers saw it that way. But in our previous work we had discovered that acrolein could bind with polyamines such as spermine and spermidine to form eight-atom cyclic molecules, and we wondered what biological role these rings might play.”

As the team began the experiments, they were surprised to find that these substances made from a combination of acrolein and the polyamines seemed to prevent amyloid-beta from aggregating together – a process linked to the progression of Alzheimer’s disease, where neurons are gradually killed by the accumulation of these amyloid peptides.

The group tested the hypothesis by incubating A-beta40 peptides in mixtures of acrolein, a polyamine known as spermine, and a cyclic compound formed by acrolein and polyamines. Neither of the first two molecules alone had any effect on fibrillation, but the cyclic compounds turned out to be powerful inhibitors. The researchers also found that when acrolein and polyamines were added together into a living cell, they combined naturally through 4+4 cycloaddition to create the diazacylooctane molecule.

According to Katsunori Tanaka, who led the team: “This is important for several reasons. First, it gives us insights into the mechanism through which polyamines – which we know to be tremendously important biologically – exert their action. And secondly, because acrolein and polyamines combine naturally in cells to form these powerful anti-fibrillation substances, it may open the way for us to influence the progression of terrible neurological disorders such as Alzheimer’s.”

Next the team hope to conduct experiments with A-beta42, which is more prone to fibrillation and is also believed to play a key role in Alzheimer’s disease.