Discovery could lead to new and better heart failure drugs 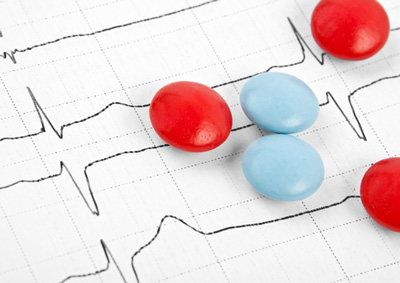 Research offers the possibility of developing a new class of heart failure medications that could potentially be more effective than existing treatments.

Beta-blockers, commonly used to treat heart failure, work by blocking the beta-adrenergic receptors in the heart, saving heart cells from cell death. But beta-adrenergic receptors also help keep the heart pumping, a function that this medication also blocks. Now, Jefferson researchers have discovered how to bypass this problem by tapping a different pathway that both blocks damage to the heart and helps it keep pumping.

Of the beta-adrenergic receptors present in the heart, it is the beta1-adrenergic receptors that are primarily responsible for the heart’s contraction, or pumping action, and that are targeted by traditional beta-blockers. Dr Jeffrey Benovic Benovic’s lab, however, had developed a series of molecules called pepducins that were derived from pieces of the beta2-adrenergic receptor, and which, they discovered, could selectively activate the very receptor they came from.

It was while former graduate student Richard Carr, in Dr. Benovic’s lab, was characterising the properties of these pepducins that he noticed that the molecule shared similar characteristics to a common heart-failure medication called carvedilol. They sent the pepducin to Dr Douglas Tilley at Temple University who tested how heart cells responded to the molecule. “He was blown away by what he saw,” said Dr Benovic. When Dr Tilley pulsed the heart cells with the pepducin, the cells started to beat more forcefully. The pepducin they were using was specific for the beta2-adrenergic receptor pathway, and didn’t have any effect on the beta1 receptors. The researchers had demonstrated for the first time that contraction of heart muscle cells could be triggered via the beta2-adrenergic receptor, using this novel pepducin.

Getting pepducin to full activation

Through further biochemical analysis the researchers showed that the pepducin activated the ability of the beta2-adrenergic receptor to interact with a secondary signalling molecule called beta-arrestin and that it was this interaction that promoted the heart cells to beat. In addition, the pepducin only activated the beta2 receptor to 40 or 50 percent. “By tinkering with the pepducin molecules,” said Benovic, “we think we can get full activation.”

The next step for the researchers is to design a better version of the pepducin. In addition, Dr Benovic and colleagues plan to screen existing small molecules to see if one can mimic the action of the pepducin. They also plan to study the structure of the pepducin and the beta2 receptors to gain better insight into the design of more effective pepducin-like molecules.