The protein, called neuregulin-1, has many forms and functions across the brain and is already a potential target for brain disorders such as Alzheimer’s disease, amyotrophic lateral sclerosis and schizophrenia… 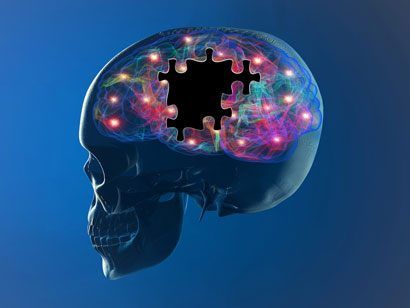 Boosting levels of a specific protein in the brain alleviates hallmark features of Alzheimer’s disease in a mouse model of the disorder, according to new research from the University of Birmingham.

The protein, called neuregulin-1, has many forms and functions across the brain and is already a potential target for brain disorders such as Parkinson’s disease, amyotrophic lateral sclerosis and schizophrenia.

“It promotes metabolism of the brain plaques that are characteristic of Alzheimer’s disease.”

Previously, researchers have shown that treating cells with neuregulin-1, for example, dampens levels of amyloid precursor protein, a molecule that generates amyloid beta, which aggregate and form plaques in the brains of Alzheimer’s patients. Other studies suggest that neuregulin-1 could protect neurons from damage caused by blockage of blood flow.

In the new study, Lee’s team tested this idea in a mouse model of Alzheimer’s disease by raising the levels of one of two forms of neuregulin-1 in the hippocampus, an area of the brain responsible for learning and memory. Both forms of the protein seemed to improve performance on a test of spatial memory in the models.

Additionally, the levels of cellular markers of disease, including the levels of amyloid beta and plaques, were noticeably lower in mice with more neuregulin-1 compared to controls.

Neuregulin-1 breaks up plaques by raising levels of an enzyme called neprilysin, shown to degrade amyloid-beta but the researchers are exploring other possible mechanisms, such as whether the protein improves signalling between neurons, which is impaired in Alzheimer’s.

A neuregulin-1 treatment is not available on the market, though it is being explored in clinical trials as a potential treatment for chronic heart failure and Parkinson’s disease.

Pro’s and con’s of neuregulin-1

One advantage of neuregulin-1 as a potential drug is that it can cross the blood brain barrier, which means that it could be administered relatively noninvasively even though the efficiency is not clear.

On the other hand, other research suggests too much of the protein impairs brain function. Working with chemists at Salk, Lee’s team has come up with a small molecule that can raise levels of existing neuregulin-1 (rather than administering it directly) and are testing it in cells. This alternative therapy could be a better way to prevent plaques from forming because small molecules more readily cross the blood brain barrier.

Treatment for other diseases

The group is also interested in neuregulin-1 for its ties to schizophrenia. An alteration in the neuregulin-1 gene, a single change in one letter of the DNA code for the protein, has been found in families with schizophrenia and linked to late-onset Alzheimer’s disease with psychosis, suggesting the protein may be a way to understand the overlap between Alzheimer’s and other brain disorders.

An important caveat is that the new research was conducted in a single type of mouse model of Alzheimer’s but the group is testing the drug’s affects across other models.

“There’s much more work ahead before neuregulin-1 could become a treatment, but we are excited about its potential, possibly in combination with other therapeutics for Alzheimer’s disease,” Lee says.