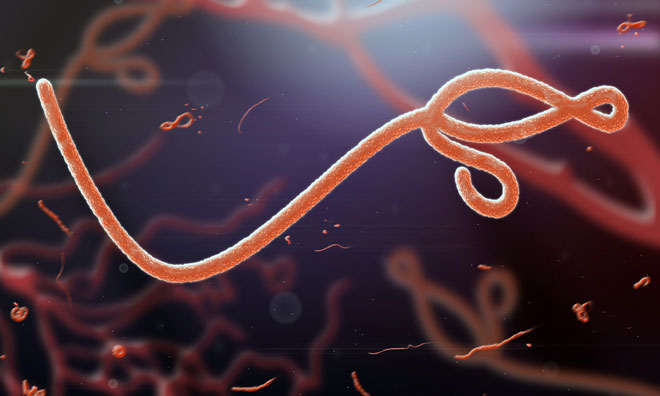 A new study co-led by scientists at The Scripps Research Institute suggests that Ebola virus gained a genetic mutation during the 2013 – 16 epidemic that appears to have helped it better target human cells.

“There was this belief that Ebola virus essentially never changes,” said TSRI infectious disease researcher Kristian Andersen, who also serves as director of infectious disease genomics at the Scripps Translational Science Institute. “But this study tells us that a natural mutation in Ebola virus—which occurred during an outbreak—changed infectivity of human cells.”

For the new study, Andersen and his colleagues used a sequence catalogue of viral genomes previously generated from 1,438 of the more than 28,000 known Ebola cases during the recent outbreak. The new study is therefore an unprecedented approach to studying Ebola virus. Every previous outbreak had been relatively small, so researchers had never before been able to examine the genomes from this many Ebola cases. As they sorted through these sequences, a mutation on a site on Ebola’s outer protein, called its glycoprotein, caught the scientists’ attention. Because the glycoprotein of Ebola virus binds to its receptor on host cells, mutations in that site can affect a virus’s ability to infect.

“This receptor binding domain of the virus has been the same since the first Ebola outbreak in 1976,” said Andersen. “This is the only time we’ve ever seen a mutation in this domain.”

Next, the scientists tested GP-A82V’s reaction to many types of animal cells and found that the mutation specifically helps the virus infect primate cells. The researchers believe the size of the outbreak made detecting this kind of mutation more likely. Scientists suspect that Ebola normally lives in bats—but with more human hosts, the virus had more opportunities to adapt to humans.

“We think this shows that when you have large outbreaks, of Ebola or other viruses, you could have these events where they may evolve to become more successful in a new host,” explained TSRI Research Associate Nathan Grubaugh with William Diehl of the University of Massachusetts Medical School, Aaron Lin of the Broad Institute and Luiz Max Carvalho of the University of Edinburgh.

The researchers are not sure exactly how this mutation boosts the virus’s ability to enter human cells. One hypothesis is that the mutation shifts nearby amino acids in the Ebola virus receptor binding domain, helping the glycoprotein better fit with the human host receptor—like a key in a lock.

Andersen emphasised that the GP-A82V form of Ebola virus is most likely no longer a threat. “It’s important to understand that once the outbreak is over, this particular virus will likely disappear,” Andersen said. Instead, the findings are important because they answer the question of whether Ebola virus can gain mutations during outbreaks that can potentially change the function of viral proteins. Andersen and Grubaugh also see this study as an example of how genome sequencing can help researchers respond more quickly to epidemics and tailor therapies to the specific strain of a virus active in an outbreak. “This sort of work can affect decision making,” said Andersen.

The researchers credited their collaboration with other laboratories for making this study possible. “Because of this collaboration, and how other groups quickly made their research data publicly available, we were able to track how the virus changed,” said Grubaugh.

The next steps will be to examine other mutations that showed up during the recent outbreak. The researchers would also like to see if increased infectivity changes mortality rates and the likelihood of a person transmitting the disease.