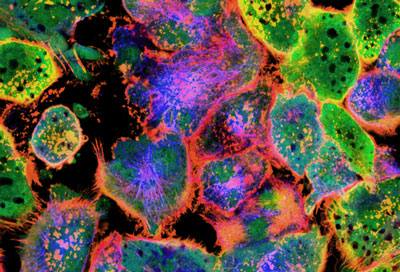 Children’s Cancer Institute and Abcam plc, a global leader in the supply of life science research tools, announced today that they have entered into an exclusive licence, supply and distribution agreement for multidrug resistance protein 4 (MRP4/ABCC4) inhibitors, Ceefourin™ 1 and Ceefourin™ 2, for research purposes.

The first known selective inhibitors of MRP4, Ceefourin 1 and Ceefourin 2 are potent, chemically distinct compounds and represent important tools for investigating essential cellular processes such as multidrug resistance. The compounds will enable the further exploration of MRP4 function and have potential in development of therapeutic drugs to treat cancer. The novel MRP4 inhibitors were discovered and characterised by Children’s Cancer Institute.

MRP4 is a protein that belongs to the ATP-Binding Cassette (ABC) transporter superfamily of membrane pumps that export molecules from the cell. MRP4 effectively effluxes elements that are potentially toxic to the cell, protecting it from deleterious chemical build-ups and from xenobiotics, such as environmental toxins. Previous research on MRP4 and other ABC transporter family members has shown that these proteins are often ‘hijacked’ by cancer cells, which produce them at high levels to pump out chemotherapy drugs, effectively protecting the cancer cells from treatment.

Up to this point, researchers have not had access to effective MRP4 inhibitors without substantial confounding off-target effects. Highly specific research reagents are crucial to accurately defining how these proteins work. Furthermore, used together, these compounds provide a complementary toolset for the research community, with the potential for enabling studies in the field to be more effective and insightful, and deliver results faster.

Professor Murray Norris, Lead researcher and Children’s Cancer Institute Deputy Director, said: “We are delighted to be able to make these research reagents available to the scientific community worldwide through our partnership with Abcam. These compounds will enable researchers to obtain new insights into MRP4 function and to modulate extracellular drug transport.”

Matthew Roe, Head of Reagents, Abcam said: “We are very pleased to partner with Children’s Cancer Institute, and to manage distribution of these reagents to the research community, helping to increase the impact of their findings and help scientists discover more.”

The Ceefourin MRP4 inhibitors now available from Abcam include:

Ceefourin™ is a trademark of Children’s Cancer Institute. Ceefourin 1 and Ceefourin 2 are claimed under Australian provisional patent application 2014902472.

The licence agreement was facilitated by Bio-Link Australia, a life sciences commercialisation company.