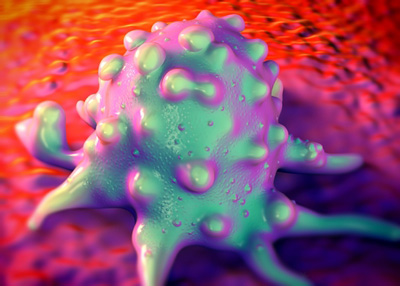 Changing the shape of breast cancer cells could make the disease more sensitive to treatments – even driving the body’s own inflammatory response against a tumour – a new study shows.

Scientists at The Institute of Cancer Research, London, showed that the shape of a tumour cell is an important factor in determining its response to inflammatory molecules, which can either promote or inhibit cancer progression.

The research used robotic microscopy and automated algorithms, similar to those used by Facebook for facial recognition, to measure the shape of hundreds of thousands of different breast cancer cells.

The study, published today in Molecular Systems Biology, was funded by Cancer Research UK, the Biotechnology and Biological Sciences Research Council and the Wellcome Trust.

The researchers were looking for a connection between cell shape and the activity of a key cancer protein, called NF-kappaB, which is switched on in response to inflammation and sends out pro-survival signals in cancer cells.

They measured a total of 77 shape and ‘context’ features – such as how close a cell was to its neighbours – in more than 307,000 cells. Features of shape they analysed included roundness, their length divided by their width, and measures of protrusions and ‘ruffliness’.

They discovered that they could divide the cells into two main groups, based on levels of NF-kappaB in their nuclei. ‘Mesenchymal-like’ cancer cells – which tended to be larger and more ‘ruffly’, with multiple sharp protrusions – had higher levels of NF-kappaB in their nuclei than ‘epithelial-like’ cells, which tend to be rounder and softer-edged.

Crucially, the study also showed that an inflammatory signal called TNFalpha strongly activated the NF-kappaB survival signal in mesenchymal-like cells, but only weakly did so in epithelial-like cells. Through detailed mathematical analysis, the researchers showed that cell shape influenced the flow of NF-kappaB into and out of cell nuclei in response to TNFalpha.

Study leader Dr Chris Bakal, Team Leader in Dynamic Cell Systems at the ICR, said: “Our study shows the crucial importance of a breast cancer cell’s shape in how it responds to inflammation – with certain shapes more likely to respond to the body’s immune system by activating pro-survival signals. Changing cell shape – through mechanical, chemical or genetic means – could be a new way of assisting the body’s own inflammatory response to fight cancer.

“Interest in using the body’s own inflammatory response to fight cancer has been reinvigorated recently because of the promising results of immunotherapy. Our study further supports the need to explore the role of inflammation and cancer, in order to enhance treatments and the body’s own ability to eliminate cancer cells.”

Professor Paul Workman, Chief Executive of the ICR, said: “Cancer cells are in a battle against the body’s natural failsafe mechanisms that seek out and destroy them. This study underlines the importance of a cancer cell’s shape in helping to tip the balance in its favour, not only dodging an immune reaction but actually thriving in response to it. It also shows that manipulating cell shape could help tip the balance back against a tumour.”

Dr Alan Worsley, Cancer Research UK’s senior science information officer, said: “This research shows how the shape of a cell and its environment may have a big effect on how that cell receives signals to grow and survive. These results highlight differences between how cancer cells behave in a petri dish compared with in a person, and we need to understand these differences when researching new treatments.”