PARP inhibitors could work in larger group of patients 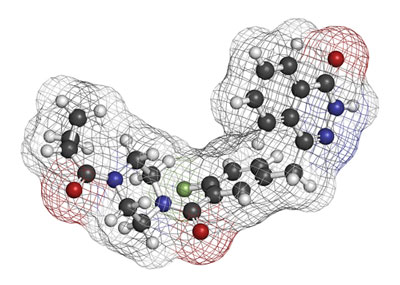 A pioneering class of drugs, known as PARP inhibitors, that target cancers with mutations in the BRCA breast cancer genes could also work against tumours with another type of genetic fault, a new study suggests.

Scientists at The Institute of Cancer Research, London, found that errors in a gene called CBLC leave cancer cells vulnerable to PARP inhibitor drugs. Around 2 per cent of all tumours have defects in CBLC.

The study, which was carried out in collaboration with colleagues in Denmark and the Czech Republic, was funded in the UK by the European Union, and was published today in the journal Oncotarget.

Olaparib, a PARP inhibitor, became the first cancer drug targeted at an inherited genetic fault to reach the market when it was approved in December for use in ovarian cancer patients with BRCA1 or BRCA2 mutations. Its development was underpinned by research at The Institute of Cancer Research (ICR).

Using an approach known as RNA interference screening – which ‘silences’ genes to analyse their function – researchers systematically tested which of the 25,000 genes in the human genome affected the response of cancer cells to olaparib.

The ICR team found that cancer cells with a defect in the CBLC gene were as sensitive to the drug as those with a faulty BRCA2 gene.

By analysing the molecular processes that the CBLC gene controls, researchers found that it normally allows cells to repair damaged DNA by fixing broken DNA strands back together.

DNA repair is often disrupted in cancer cells, which sacrifice genetic stability as they gain mutations that allow them to divide uncontrollably. These cancer cells may be particularly vulnerable to drugs to block DNA repair proteins, since they may lack any alternative functioning repair systems to fall back on.

“Our study has found that defects in a rather poorly studied DNA repair gene called CBLC seem to greatly increase sensitivity to olaparib, a PARP inhibitor which is currently licensed only for BRCA-mutated cancer.

“PARP inhibitors are an exciting new class of cancer drug. Understanding why different types of tumour cells respond to PARP inhibitors will play a critical part in making sure these new drugs are used in the most effective way.”

Collaboration in development of PARP inhibitors a success

“The development of PARP inhibitors is a UK success story, with collaboration between ICR academics, companies, charities and the NHS leading to trials in BRCA-mutated cancers and the licensing of olaparib only a few months ago.”

“This new study adds to evidence that PARP inhibitors can be effective in a broader group of patients than those with BRCA mutations, and could lead to them being used more widely in patients with other kinds of faults in DNA repair.”

The ICR’s mission is to make the discoveries that defeat cancer. For more information visit http://www.icr.ac.uk