Researchers at the University of Copenhagen have discovered how to map more than one protein at a time, when proteins repair damaged DNA. 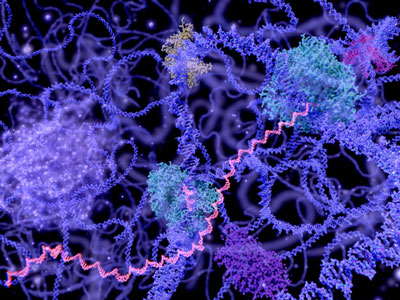 Researchers at the University of Copenhagen have discovered how to map more than one protein at a time, when proteins repair damaged DNA.

It is a discovery that will help accelerate the process of developing better and gentler cancer treatments.

When DNA is damaged, several different proteins start pouring in to repair the damage; their types depend on the damage done. Up until now, it has been common practice to study one protein at a time, but by using mass spectrometry, researchers are now able to simultaneously see all the proteins that help repair damaged DNA.

This method has been developed by the German Max-Planck Institute in Munich, headed by Professor Matthias Mann, who is also affiliated with the Faculty of Health and Medical Sciences, in the capacity of Research Director at CPR Professor of Molecular and Cellular Biology in close collaboration with Niels Mailand’s team at the Novo Nordisk Foundation Centre for Protein Research.

The new technique has tremendous potential, because today, much cancer treatment, including chemotherapy, is aimed at inducing massive DNA damage in order to kill the cancerous cells. An unwanted side effect though, is that perfectly healthy cells are also damaged. This method enables researchers worldwide to obtain better insight into how and which proteins help repair the damaged DNA.

“We get a much clearer and more general picture of the reparatory process, i.e. where previously, we were only able to see one piece of the puzzle at a time, we are now able to see the entire puzzle. And this makes it a lot easier to see what is going on, and then work from there. The better we understand these processes, the better and gentler cancer treatments we can develop”, says Niels Mailand.

The discovery has just been described in an article in Science. The paper describes chemotherapy-induced DNA damage, because the researchers wanted to relate their findings to the treatment of cancer. By using this method, Niels Mailand and his research team have discovered that two specific and hitherto un-described proteins play an important part in repairing damaged DNA.

“This new method enables us to quickly get an overview of the entire bag of proteins that are important in terms of repairing damaged DNA. In this process, we have discovered that the two proteins have a specific part to play and attract certain necessary elements to a given spot where DNA-repairs are taking place. In other words, this new technique allows us to put the puzzle together much quicker,” says Niels Mailand, who is close to being able to determine the function of another 5-10 proteins in the DNA damage-response, which have also been located by way of this new technique.