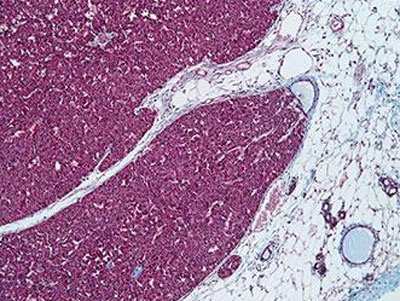 On the left, a breast cancer type called luminal; on the right, a type called triple-negative/basal. The luminal microenvironment has less fibrosis (scar tissue, coloured purple) and contains few inflammatory cells embedded within these fibrotic areas or in the surrounding fatty tissue (white). The triple-negative microenvironment contains more inflammatory cells and more fibrosis. Targeting a protein called MMP9, which promotes cancer and is linked with poor prognosis, slowed the course of the triple-negative/basal breast cancer, the one with the more profoundly altered microenvironment, but had no impact on the luminal cancer. CREDIT: Egeblad Lab, CSHL

A team of researchers led by Associate Professor Mikala Egeblad of Cold Spring Harbor Laboratory (CSHL) have found that two different mouse models of breast cancer progressed differently based on characteristics of the tumour microenvironment.

The tumour microenvironment includes cells and extracellular molecules that support the tumour’s growth. Egeblad and her team looked at two types of breast cancer driven by different mutations, and found very different microenvironments. One common factor was the presence of an extracellular protein called matrix metalloproteinase 9 (MMP9). It was expressed at similar levels in tumours from both breast cancer mouse models.

MMP9 has been linked to the progression of many cancer types

MMP9 previously has been linked to the progression of many types of cancers. When the researchers deleted the Mmp9 gene, they found that the absence of the MMP9 protein delayed tumour onset only in one mouse model, and had no effect in the other model.

Egeblad and her team found that whether MMP9 promoted cancer or not depended on the tumour microenvironment. Specifically, on the presence of another molecule that MMP9 is known to act on, called insulin-like growth factor binding protein 1 (IGFBP-1). “If IGFBP-1 is not there, MMP9 didn’t really have an effect, but if it’s there, then MMP9 has a role,” says Egeblad. This suggests that IGFBP-1 interacts with MMP9 to promote tumour formation.

Egeblad and her team looked in human cancer databases to see if the interaction between MMP9 and IGFBPs predicted breast cancer prognosis in humans. “We found that IGF-binding proteins are associated with a good prognosis, but if MMP9 is also present, there’s no longer good association with survival,” Egeblad says.

The study’s results have implications for anti-cancer drugs that target MMPs, and may explain why previous clinical trials using MMP inhibitors have failed. The new study suggests that trials of MMP inhibitors could focus on patients whose tumour microenvironment contains IGFBPs.

More broadly, the research suggests that it may not be enough to see if a particular drug target is present in a certain type of cancer; researchers may also need to look for the presence of the molecules that the drug target acts upon.

The research is published in Neoplasia.