Understanding regulation of urocortin 3 could lead to new diabetes treatments 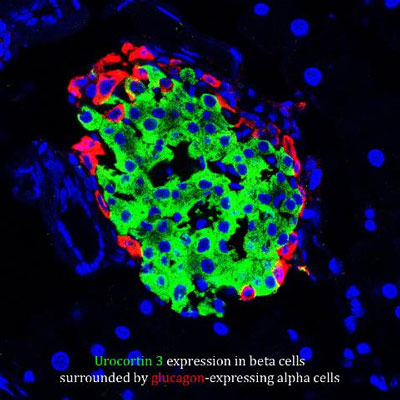 Sugar levels are managed by interactions between cells of the Islets of Langerhans in the pancreas. The hormone urocortin (green) is produced and stored in the same cells as insulin in the islets. Cells that make glucagon, which works to raise blood sugar, are stained red. CREDIT: Mark Huising, UC Davis

Mark Huising, an assistant professor at the UC Davis College of Biological Sciences, has been observing the crosstalk that happens between the cells that control the body’s response to sugar in the hope that understanding the conversation can help us understand, and perhaps ultimately treat, diabetes.

Huising’s lab has now identified a key part of the conversation going on between cells in the pancreas. A hormone called urocortin 3, they found, is released at the same time as insulin and acts to damp down insulin production.

“It’s a beautiful system,” Huising said. “It turns out that there is a lot of crosstalk going on in the islets to balance insulin and glucagon secretion. The negative feedback that urocortin 3 provides is necessary to tightly control blood sugar levels at all times.”

Diabetes affects millions of people around the globe. Both forms of the disease – type 1, “juvenile” or “insulin-dependent” diabetes, and type 2 or “adult-onset” diabetes – occur when the body fails to regulate the level of sugar properly.

Diabetes is tied to structures called the Islets of Langerhans in the pancreas. Within the islets, beta cells make insulin. Increasing blood sugar stimulates insulin production, which causes the body’s cells to pull sugar out of circulation. The islets also house alpha cells, which make another hormone, glucagon, which acts on the liver to release more glucose into the bloodstream.

Urocortin 3 was originally identified as a hormone that is related to the signal in our brain that kick-starts our stress response. Instead, urocortin 3 is produced by islet beta cells and stored and released alongside insulin. In a series of experiments, Huising’s group showed that urocortin 3 causes another cell type in the islets, delta cells, to release somatostatin, which turns down insulin production and acts as a natural brake on the release of insulin.

Urocortin 3 is reduced in laboratory animal models of diabetes and in beta cells from diabetic patients. Without urocortin 3, islets produce more insulin, but at the same time lose control over how much insulin they release. By understanding how different cells and systems communicate to regulate blood sugar, Huising hopes to get a better understanding of what happens when this regulation goes wrong, leading to the different forms diabetes. Eventually this approach could lead to new ways to treat or prevent the disease.

A paper describing the work appears in the journal Nature Medicine.