The Ebola virus responsible for the outbreak in West Africa mutated at a similar rate to previous outbreaks, according to a new study led by PHE… 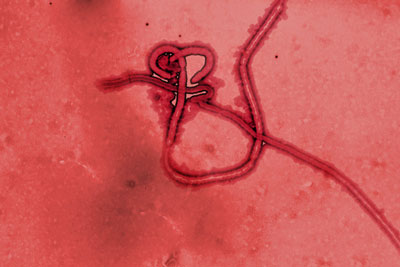 The Ebola virus responsible for the outbreak in West Africa mutated at a similar rate to previous outbreaks, according to a new international study led by Public Health England (PHE).

Early in the outbreak, research suggested the virus’ mutation rate was twice that of previous Ebola outbreaks. However, PHE’s study has established that the mutation rate was only slightly higher than previous outbreaks, which is reassuring to public health experts around the world.

Granted unprecedented access to data covering a period of almost a year, the scientists analysed 179 patient samples obtained by the European Mobile Laboratory (EMLab), which was deployed to the epicentre of the outbreak in Guinea, to reveal how the Ebola virus mutated and spread.

The analysis confirmed that the Ebola virus was introduced into the Guinean population in December 2013 at a single source, supporting theories from epidemiologists (scientists who investigate the spread of disease). Scientists believe the virus was initially transmitted from a bat to a 2-year-old boy in Guinea.

The team also established how the virus spilled into Sierra Leone from Guinea in April or early May 2014. Notably, a large number of the early cases in different regions of Sierra Leone can be linked to a single funeral.

Lead author Professor Miles Carroll, head of research microbiology services for PHE, said, “Our analysis shows the Ebola virus responsible for the current outbreak mutated at a similar rate to the earlier outbreaks in Uganda and the Democratic Republic of Congo. The results are good news for the scientists working to develop long-term solutions for Ebola, such as vaccines and treatments, as it means these new interventions should still work against the mutated strains of the virus. Currently, rehydration and replacement of critical elements appear to be the best way to improve a patient’s chances of surviving Ebola.”

Professor Carroll continued, “Following this study, we have theorised that one of the key factors in whether Ebola kills someone is the host’s genetic makeup rather than changes in the virus itself. Our next study will investigate this theory which may lead to improved treatment options.”

Professor David Heymann, PHE Chairman and of Infectious Disease Epidemiology at the London School of Hygiene and Tropical Medicine, said, “This project, funded by the European Commission, illustrates how international collaboration is the most effective way to progress our understanding of new emerging diseases and develop innovative public health treatments and vaccines.

“PHE are supporting global efforts to find the best diagnostic, vaccine and treatment options for Ebola. This research is reassuring to scientists and the public that the recent work on Ebola has been worthwhile and could soon lead to a better state of preparedness and response for the future.”

The research findings are publishing in full in the journal Nature.