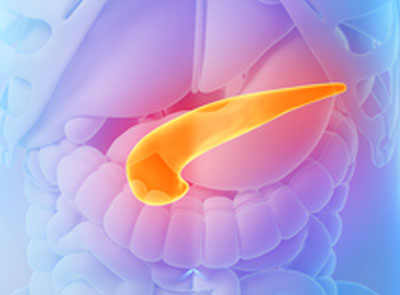 Scientists from University College London (UCL) have designed a chemical compound that has reduced the growth of pancreatic cancer tumours by 80% in treated mice.

The compound, called MM41, was designed to block faulty genes. It appears to do this by targeting little knots in their DNA, called quadruplexes, which are very different from normal DNA and which are especially found in faulty genes.

The research findings showed that MM41 had a strong inhibiting effect on two genes — k-RAS and BCL-2 — both of which are found in the majority of pancreatic cancers.

The UCL team, led by professor Stephen Neidle, conducted a small-scale trial, treating two groups of eight mice with pancreatic tumours with different doses of MM41 twice a week for 40 days. A further control group received no treatment. The tumours in the group given the larger dose decreased by an average of 80% during the treatment period, and after 30 days, tumour regrowth stopped in all the mice. For two of the mice in this group, the tumour disappeared completely with no signs of regrowth after treatment ended for a further 239 days (the approximate equivalent to the rest of their natural life span).

Analysis of the mice tumours showed that the MM41 compound had been taken up into the nucleus of the cancer cells showing that it was able to effectively target the pancreatic cancer tumour.

The team also saw no significant side effects on the mice during the study: there was no damage to other tissue or organs, and none of the mice showed any significant weight loss.

Discussing the results, Neidle explained, “This research provides a potentially very powerful alternative approach to the way that conventional drugs tackle pancreatic cancer, by targeting a very specific area of the DNA of faulty genes. One of the genes that MM41 blocks — the BCL-2 gene — is involved in regulating apoptosis, the body’s natural process which forces cells to die if they become too damaged or unhealthy to be repaired. BCL-2 is present in high amounts in many tumours and helps cancer cells to survive, but when the BCL-2 gene is blocked by MM41 in mice, the cancer cells succumb to apoptosis and die.”

Neidle stressed that although these results are exciting, MM41 is not ideal for trialling in humans and further refinements are needed. “We are now working to optimise this class of compounds, but it’s clearly worthy of further investigation for potential use in treating pancreatic cancer in people,” he said.

Pancreatic cancer is the most lethal of any common cancer. Only three in every 100 people diagnosed will live for five years or more and this survival rate has barely improved in the last 40 years. The majority of patients are diagnosed too late for surgery — currently the only potentially curative treatment — and 80 per cent of those who have surgery will see the cancer return.

Maggie Blanks, Pancreatic Cancer Research Fund’s CEO, said, “It’s because of these bleak facts that our funding strategy focuses on finding and developing alternative, effective treatments for patients as well as finding a way to diagnose pancreatic cancer at an early stage. To find a potential new way to kill pancreatic cancer tumour cells is an exciting development.”

The research is published in Nature Scientific Reports.